Well, maybe not such strange bedfellows after all ~ Jane Austen did, as we all surely know, invent baseball [and here], so why not give her a well-deserved mention in Sports Illustrated?

I write this because my son went out of his way to drive over to my house just to show me what he assumed would be a glorious surprise – a Jane Austen siting that I surely couldn’t know about!  But alas! I had to tell him the truth that I already did know about not only the sale of The Watsons manuscript, but also the Sports Illustrated mention! – he is now more impressed than ever with my literary detective abilities, my ceaseless knowledge of everything and anything on Jane Austen [thank goodness for google alerts!] – but I felt that his efforts deserved a blog post, so here it is:

Price fetched at auction by Sheffield FC, the world’s oldest soccer club, for its printed and handwritten versions of the game’s original rules, which were drafted in 1858.

Price fetched at the same auction for the original draft of Jane Austen’s unfinished novel The Watsons.

Click here to see it on the page in SI: Austen Sports Illustrated 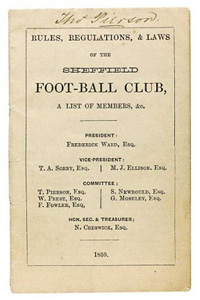 Now I realize the SI editors were just following the same auction and wanted to show the comparison between the value of some old soccor rules and classic literature, but can this mean that Jane Austen in the Swimsuit issue will not be far behind?