UPDATE: The deadline to comment and win a kindle copy of  Revisit Mansfield Park, How Fanny Married Henry has been extended until next Sunday November 30, 11:59 pm due to the holiday – winner will be announced December 1st. Sarah has offered a second copy of her book as an incentive to comment! Happy Thanksgiving all!

Gentle Readers:  I invite today to ‘Jane Austen in Vermont’ Sarah Ozcandarli, who has written a story reimagining the ending of Mansfield Park, an ending about which all of us, including Jane Austen, have pondered the “what if…?” Her book is titled Revisit Mansfield Park, How Fanny Married Henry – I confess to not having finished the book as yet – it is now on my kindle awaiting a moment to give it the time it deserves (I will say that the first three chapters very nicely summarize the plot and characterizations of Mansfield Park).

Sarah contacted me a few weeks ago to say that a number of my links on the blog led to the dreaded “oops! – where did you find such a link?” – because as all we bloggers know, who has time to go back and check all the links we ever have put out there, links that go nowhere – such a disappointment to the reader – I wonder always, where does this information go to? Some cyberspace default-filled world with thoughts and ideas and information no longer accessible – it is all quite daunting really, isn’t it?? – but I did go in and remove or edit some of these links Sarah told me about, and in our conversation she told me she had written a tale of Mansfield Park with the plot line that Fanny and Henry do end up together (no spoilers here, this outcome, as you see, is in the title!), as do Edmund and Mary – not an uncommon thought among those people largely disappointed with the lacklustre ending of Mary going off to London, Henry off with Maria and then on to his surely dissipated life (a life Fanny could have salvaged if she had only given him the chance he asked her for),  and Fanny and Edmund riding off into the sunset of boredom.  So I give you a post from Sarah about how her love of Jane Austen began, and what it was about Mansfield Park that made her want to change the ending. Please leave your comment or question for Sarah to win a kindle version of her book – see details below!

“You will not know the day or the hour”, says St. Matthew, but if the agent is Masterpiece Theatre in the year 1981, the day will Tuesday and the hour 8:00 pm. I was toiling through my last semester at university on that fateful night, when there were two contenders for my attention: Electricity & Magnetism II and the BBC’s Pride & Prejudice. I wanted to study E&M, but my housemates Meg and Laurie were determined that I should be acquainted with Jane Austen. They were two against one, but we were all winners, for I fell in love with Lizzy and Darcy and their creator about fifteen minutes into the program.

Once graduated, and free to read according to my own inclinations, Jane Austen quickly became my first favorite among writers and has never descended from that pedestal. I read all I could find about her life and family, I devoured her letters, but oddly enough, I never noticed the vast collection of Austen-related news, fact, and opinion on the internet. One day in 2012 I googled “white soup” and read through one blog, and then another, and realized that our respect for the greatest novelist in the English language need not prevent us from using her characters to people our own stories!

That being so, I could fulfill my wish (and Cassandra Austen’s as well) that in Mansfield Park Fanny Price should be allowed to marry Henry Crawford, instead of Edmund Bertram. After all Jane herself had written that if Henry had “persevered, and uprightly, Fanny must have been his reward,” and with Jane’s and Cassandra’s opinions of Henry duly noted I was emboldened to write a different ending for Mansfield Park – a sort of Volume III(b) – with plans for a sequel to tackle Edmund and Mary’s problems.

The first difficulty of the story I wanted to tell was that Fanny justifiably disliked and distrusted Henry, and had no 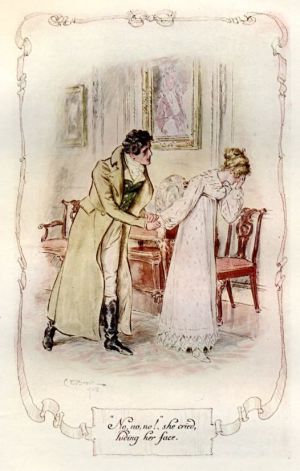 conception that his interest in her was genuine until Sir Thomas informed her that Henry had made “decided proposals” for her. When Henry left Mansfield a few days later he had achieved very little in his quest to change Fanny’s opinion of him. When next they meet, Henry was in Portsmouth to visit Fanny, and as he took his leave of her, he nearly begged her to advise him to return to his work at Everingham. In Mansfield Park Fanny rather unkindly dismissed Henry’s plea; in my story Fanny observed that:

“Henry had said he would show Fanny by his constancy that he deserved her, and now, when all her friends at Mansfield, excepting perhaps her aunt, had forgotten her even more thoroughly than she had anticipated that they would, here was Henry Crawford, as constant as he had declared he would be, and asking her advice.”

Fanny’s judgment, though in all respects sound, was only once sought in all of Mansfield Park. Edmund asked Fanny to approve his participation in Lovers’ Vows – though Edmund was well aware that Fanny would not approve – and having gotten her opinion, he ignored it. Henry’s request was a much greater compliment, not least because he intended to abide by her advice; he truly wanted to be encouraged to do right by his responsibilities at Everingham. This, I think, is the pivotal moment for Henry and Fanny, when they will move forward together if Fanny tells Henry her opinion, or stall out if she does not.

Dear Readers, please comment or leave a question for me to be entered into the giveaway of the Kindle version of Revisit Mansfield Park, How Fanny Married Henry. [see details below]

Revisit Mansfield Park for Kindle – It is available only in English, but can be purchased from Amazon in the USA, England, Germany, France, Spain, Italy, Japan, India, Canada, Brazil, Mexico and Australia, and may be read for free with the Prime or Kindle Unlimited Programs.

About the author: Sarah Ozcandarli graduated in 1981 from Carnegie-Mellon University with a BS in Physics and English, and went back three years later for an MS in Industrial Administration. Her varied career took her to Pittsburgh, Philadelphia, New York City, Los Angeles and Boston, where she sought and found her Mr. Darcy. They were married in 1996 and live near Boston with a large menagerie of wild and domesticated critters, some of which are now hibernating.

Book Giveaway! Please leave a comment or question for Sarah by Sunday Nov 23, 2014, 11:59 pm to be entered into a random drawing to win the kindle version of Sarah’s book, available to all, but you must of course be a kindle user!

You might consider the question Sarah asks:  In your reading of Mansfield Park, have you ever thought that Fanny should have ended up with Henry Crawford and Edmund with Mary? And if so, why?

19 thoughts on “When Henry Met Fanny, or Let’s Talk about a Different Ending for Jane Austen’s Mansfield Park ~ Guest Post by Sarah Ozcandarli”