Austen, Jane.  An autograph manuscript fragment, comprising four lines, attached to another leaf bearing authentication, in turn attached to a letter from her nephew, James Edward Austen-Leigh, written on paper bearing watermark date 1868, at Bray Vicarage, February 7, 1870, presenting the fragment to Rev. G. C. Berkeley: ‘Men may get into the habit of repeating the words of our Prayers by rote, perhaps without thoroughly understanding – certainly without thoroughly feeling their full force and meaning.’ All attached to the title page of a copy of Austen-Leigh’s ‘A Memoir of Jane Austen…’ fragment approximately 1.75 x 6in.

Upcoming auctions:  an abundance of Austen, Austen’s Circle, and Regency-era prints – I include various items because they are too wonderful not to share, but please visit each auction house site to see the “infinite variety” of offerings:

This auction is filled with Ackerman, Rowlandson, Cruickshank, Gillray and others! – here are a few examples, but go have a look at this treasure-trove for a Gentleman OR a Lady!

Early issue bound from the original parts, watermarked 1806-07 and with all the 13 errata at end of vol.3 uncorrected and the Contents leaf in vol.1 headed “Contents”. However, the imprint of the wood-engraved title to vol.2 does not have a comma after “Bensley” but that in vol.1 does. 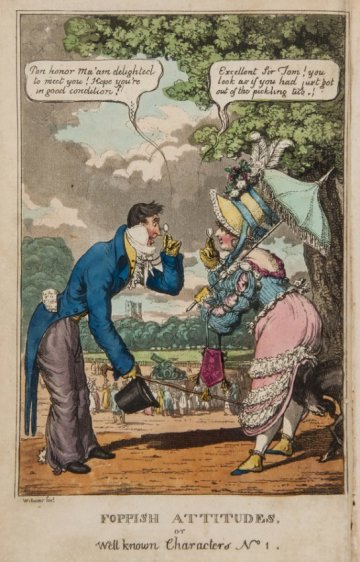 “Foppish Attitudes” from The Busy Body, or Men and Manners 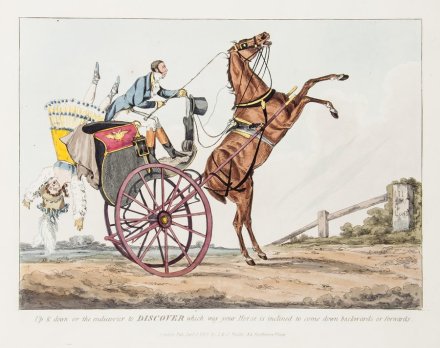 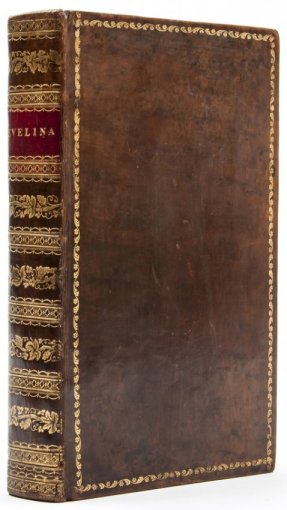 [Burney (Fanny)] Evelina: or Female Life in London: being the History of a Young Lady’s Introduction to Fashionable Life, and the Gay Scenes of the Metropolis, hand-coloured engraved additional pictorial title and 6 plates after W.Heath, all but one aquatints, most offset onto text, some browning, bookplates of Charles C.Auchinloss and Hon.John Wayland Leslie, contemporary mottled calf, gilt, spine gilt with red morocco label, small gouge to lower cover, preserved in later red silk folder (a little rubbed and faded), red morocco slip-case (slightly darkened at edges), [Tooley 119], 8vo, 1822.

⁂ ***Originally published in 1778 under the title Evelina, or, A Young Lady’s Entrance into the World but reissued with this title following the popularity of Egan’s Life in London.. 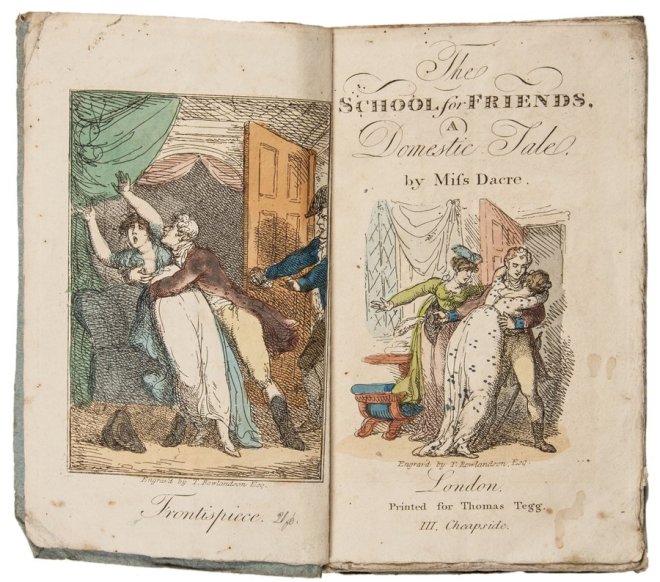 One copy only listed on COPAC, in the National Library of Scotland.. 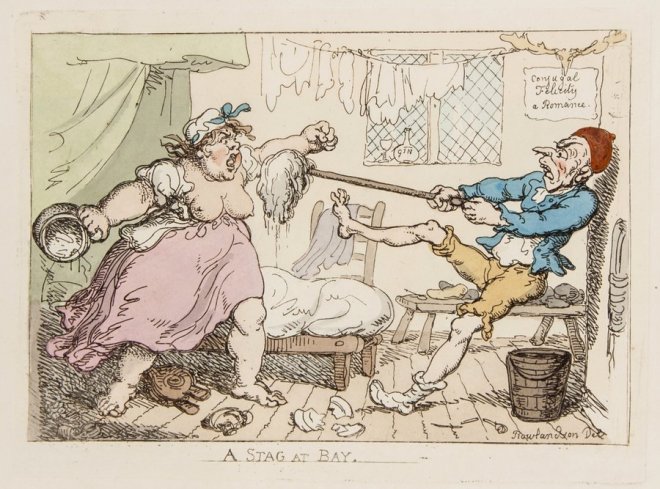 Rowlandson: “A Stag at Bay”

Hand-coloured etched title and 50 plates by Thomas Rowlandson, without the rare ‘Pall Mall’ plate but replaced with ‘The Chiropodist’ as often and with an additional plate ‘The Enraged Vicar’ (signed and dated in plate 1805), otherwise with all plates as listed in the Abbey copy, light foxing, mostly marginal but affecting a few images, ex-library copy with bookplate and ink accession number to lower margin of first plate (otherwise unstamped), later olive morocco, gilt, by Rivière & Son, spine gilt, t.e.g., rather faded and a little rubbed, covers warped, upper joint repaired, [Abbey, Life 317], 4to, R. Ackermann, [1808]. 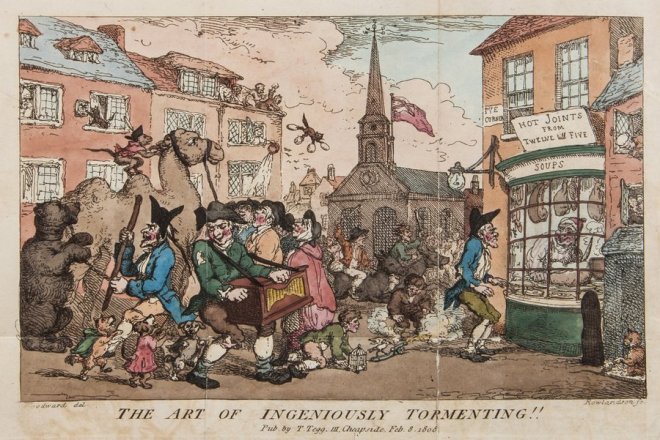 [Collier (Jane)] An Essay on the Art of Ingeniously Tormenting.

[Combe (William)] The Tour of Doctor Syntax, in Search of the Picturesque. A Poem.

There is no further description about this set in the auction catalogue, but it is the 1925 George Harrap reprint of the 1908-9 Chatto & Windus edition of the novels, with illustrations by A. Wallis Mills.  Here is one illustration: 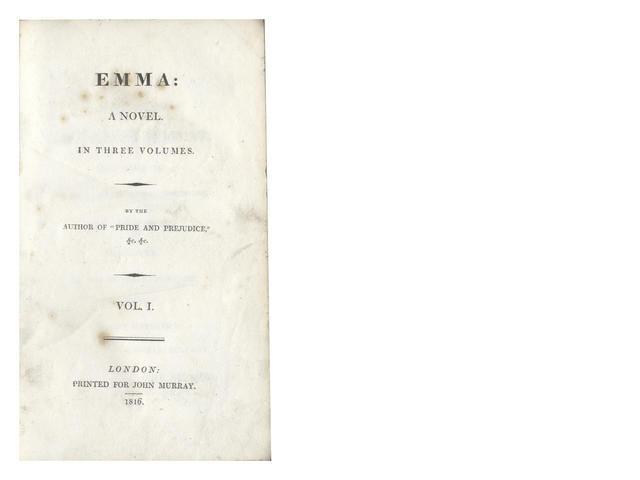 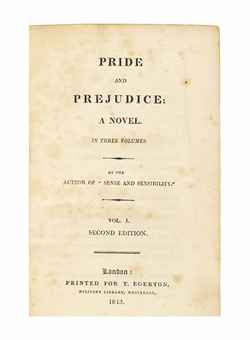 FIRST EDITION OF WOLLSTONECRAFT’S FIRST BOOK. Although it was an educational manual, the ‘more or less veiled remarks about her own emotional state … make it abundantly clear that she was far more interested in the state of her own life and the prospects that lay ahead of young women than in their years at school’ (Claire Tomalin, The Life and Death of Mary Wollstonecraft, London: Pelican, 1977, pp. 58-59). GOOD COPY. Rothschild 2595. 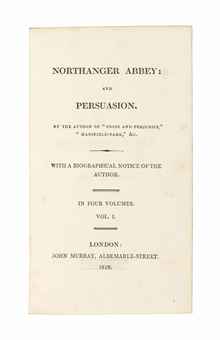 Also of interest at this auction:

JOHNSON, Samuel (1709-1784). A Dictionary of the English Language in which the words are deduced from their originals, and illustrated in their different significations by examples from the best writers. London: W. Strahan for J. and P. Knapton [and others], 1755.

FIRST EDITION. 2 volumes, 2° (405 x 250mm). Titles in red and black, woodcut tail-pieces. (The first title with repaired losses and tears affecting some letters, the titles and a few leaves repaired in the inside margin, some marginal tears and some of these repaired, occasional mostly marginal soiling and spotting, faint dampstain in the margins of some leaves in vol. II.) Contemporary calf (neatly rebacked to style, corners repaired, sides scuffed). Provenance: David Tennant (title signature, some marginalia including on the verso of second title) — Stewart of Glasserton (bookplate).

All images are from each of the auction house websites, as cited.

October 2013. As I approach the 12-month-mark of publishing my Diaries for Armchair Travelers, I marvel that the things which obsess me have been at least of passing interest to readers in 83 countries. Blogging (and I must declare that I continue to abhor the word “blog,” which is clunky and inelegant) is as optimistic and impractical an activity as shoving scrawled messages into bottles, and then lobbing the fragile containers into the sea. But web-trawlers keep finding my little missives, and so I keep dispatching more, toward parts unknown. Now that my traveling and picture-taking and writing occupy most of my time, people ask: “Why and how did you begin?” ….funny how unintentional, sideways sliding can ease us into some of our happiest endeavors.

In the fall of 2008 David Patrick Columbia, the editor of NEW YORK SOCIAL DIARY, invited me to begin writing about the international wanderings that…

So great to share this AGM in Minneapolis with you and Michelle!

Michelle has done so much justice to our JASNA AGM experience in Minneapolis, it’s not even funny. It was an amazing four days away from it all—so much so that we didn’t even usually bother to stop and recall that we were, indeed, away from it all. We were just there, immersed in all things Austen, all things Pride and Prejudice, and it was great.

Like Michelle, I came away with two things at the forefront of my mind: 1) I am only a fan and avid reader and lover of Jane Austen; I do not approach the level of serious, scholarly, and academic thought that goes into a real and deep study of her novels, although I desperately admire it and have just enough knowledge to be excited by it; and 2) Jane Austen is even more awesome than I realized. I suppose we’ve become…

So great to share this AGM with you and Sarah!

It’s been five days since our reentry into the 21st century and everyday lives. For three days, Friday, September 27 – Sunday, September 29, Sarah and I joined 750 other readers to talk about one author, and just one of her books: Jane Austen’s “own darling child” Pride & Prejudice. To sit in a full convention hall to celebrate one woman and her book, 200 years old this year, was a marvel. And yet, after listening to plenary speaker, John Mullan, on “Speechless in Pride & Prejudice,” almost 800 people didn’t seem at all out of bounds for such a subject. I came away loving Jane even more, something I didn’t think was possible.

At home, I’m the trivia nut, and have even been accused of being “obsessed” with Jane Austen. Folks, I was nothing compared to this crowd. Mullan opened up his talk with a trivia question…

Janine’s talk at the AGM was very enlightening! – hopefully it will be published in ‘Persuasions’; but you can also read the whole wonderful book [‘Matters of Fact in Jane Austen’], where the various sites and names in all of Austen’s works are discussed…

Today marks the start of the annual gathering of the Jane Austen Society of North America (JASNA), hosted this year in Minneapolis. This particular meeting celebrates the bicentennial of Pride and Prejudice (first published in 1813) with the pomp that is due this standout literary favorite, including workshops, exhibits, lectures, readings, and, of course, a Regency-style ball. Because I recently published a book about Jane Austen as a consummate name-dropper and participant in early celebrity culture, I was invited to speak to JASNA members about the celebrity currency of the names in Pride and Prejudice .

Follow the Blog Tour for A Most Clever Girl: 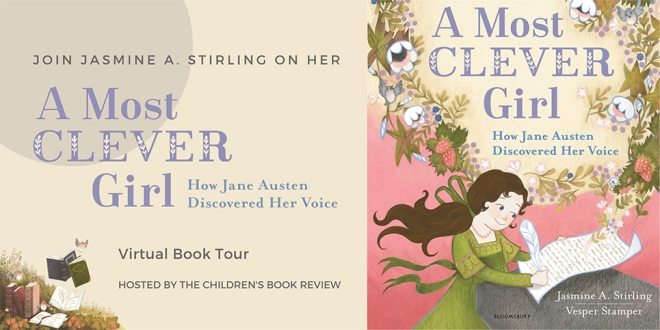