This is a wonderful find: you can download The Jane Austen Centenary Booklet, 1917  at Austenonly – thank you Julie W. and Mr. Brodnax Moore for sharing this hard-to-find pamphlet produced to mark the unveiling of the Centenary Tablet on Chawton Cottage, now the Jane Austen House Museum, in 1917.

[image and info from Austenonly] 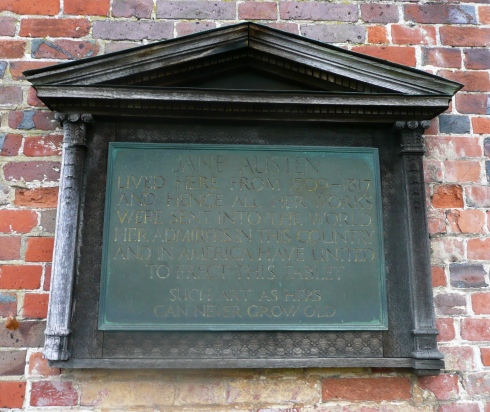 Well, first a very Happy New Year to one and all!! – I have been away from my computer, and find some of my gathered “news” is no longer actually new, so I include here just some goodies discovered on the internet, a good number only peripherally related to Jane, but interesting nonetheless… [or so I believe…]

* How about taking a Jane Austen Cruise?! This coming July, you can head from Southampton to Guernsey, Spain and France for an 8-day cruise filled with all manner of Jane Austen diversions – http://janeaustencruise.com/

* The Amanda Vickery broadcast of The Many Lovers of Jane Austen may have only aired in the UK, but we can view it here, with thanks to Diana Birchall for sending me the video link:

You might also like to check in at Jane Austen’s Regency World blog to see a review of the show by Tony Grant and the numerous (some indignant!) comments on his take on the Fort Worth JASNA AGM. You should watch the video and then read the review and comment if you can…! 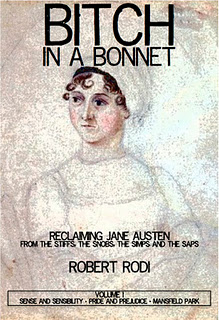 * If you have enjoyed the Bitch in a Bonnet blog, you will be interested to know that Rodi’s writings on the first three Austen novels are available for your ereader! –  all for 99c… read about it here: 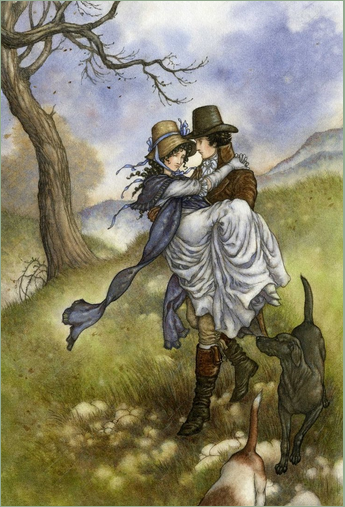 * The latest Marvel Comic of Northanger Abbey [Issue 2] came out on December14th: 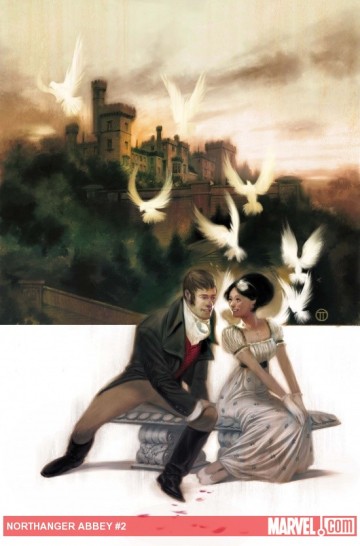 * Dr. Maureen Mulvihill spoke at the Florida Bibliophile Society on “The Evolution and Education of a Collector (1980s-): The Mulvihill Collection of Rare and Special Books and Images.”  http://www.floridabibliophilesociety.org/mulvihill.html

* If you have an interest in bygone etiquette books, Abebooks compiled a list several months ago – here are some items for sale by various booksellers:

1.  The Business of the Novel: Economics, Aesthetics and the Case of Middlemarch, by Simon R Frost

Austen is presented as a writer who not only participated in late eighteenth-century debates, but who is able to address twenty-first-century concerns of a theoretical and practical nature.

* Gentleman’s Magazine exhibit at University of  Otago – not yet online:

Special Collections,University of Otago Library, is fortunate to have an entire run of the Gentleman’s Magazine from 1731 to 1866. Started by Edward Cavein January 1731, and printed form many years at St. John’s Gate in London, it was a ‘repository of all things worth mentioning’. It was the first ‘magazine’ in the modern sense. It was also the most important periodical in 18th century England, reflecting in its pages the diversity of Georgian life, politics and culture. It covered current affairs, political opinion, lead articles from other journals, miscellaneous information such as quack cures and social gossip, prices of stocks, science and technological discoveries, notices of births, deaths, and marriages, ecclesiastical preferments, travel, parliamentary debates, and poetry. Writers such as Dr Johnson, John Hawkesworth, Richard Savage, and Anna Seward were just a few of the thousands who contributed to it. At 6d per issue, it was an outstanding bargain. It remains an inexhaustible mine of information for scholars of eighteenth century life, and because of the wealth of genealogical information and records, it has become an important resource for family historians.

Our exhibition ‘The Gentleman’s Magazine. The 18th century Answer to Google ‘ begins on 21 December 2011 and runs through to 16 March 2012, just in time for the new student intake. Eventually it will be online.

As we will are celebrating Charles Dickens 200th birthday throughout 2012, I will be posting a number of Dickens-related goings-on – I can only think that Austen would heartily approve of giving him his just due, and thus, he now has his own category in the PPWR:

1. A bookseller’s list of some of his works that they have for sale [Tavistock Books]:
http://tinyurl.com/7c2t2y3

2. This one is very exciting as it combines my love of Dickens and my love of London and makes full use of my iphone capabilities: Dickens Dark London from The Museum of London: 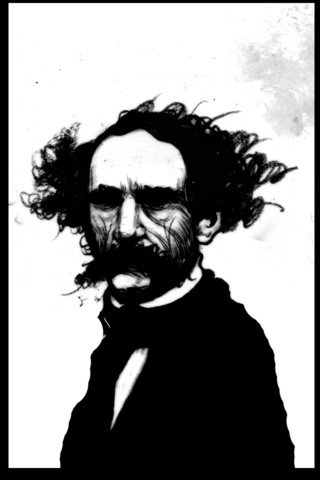 Ellen Wayles Coolidge arrived in London in June 1838 at the advent of QueenVictoria’s reign – the citizens were still celebrating the coronation. During her nine-month stay, Coolidge kept a diary that reveals the uncommon education of her youth, when she lived and studied at Monticello with her grandfather Thomas Jefferson. This volume brings the full text of her diary to publication for the first time, opening up her text for today’s reader with carefully researched annotations that provide the historical context.

London’s clocks, theaters, parks, public buildings, and museums all come under Coolidge’s astute gaze as she and her husband, Joseph Coolidge, Jr., travel the city and gradually gain entry into some of the most coveted drawing rooms of the time. Coolidge records the details of her conversations with writers such as Samuel Rogers, Thomas Carlyle, and Anna Jameson and activists including Charles Sumner and Harriet Martineau. She gives firsthand accounts of the fashioning of the young queen’s image by the artists Charles Robert Leslie and Sir Francis Chantrey and takes notes as she watches the queen open Parliament and battle the first scandal of her reign. Her love of painting reawakened, Coolidge chronicles her opportunities to view over four hundred works of art held in both public and private collections, acknowledging a new appreciation for the modern art of J. M. W. Turner and a fondness for the Dutch masters.

As rich as her experience in England proves to be, Coolidge often reflects on her family in Boston andVirginia and her youth at Monticello. As she encounters her mother’s schoolgirl friends and recalls the songs her grandfather sang while working in his study, Coolidge’s thoughts return to Monticello and the lessons she learned there. Across the spectrum of her observations, Coolidge’s diary is always strikingly vivid and insightful – and frequently quite funny.

* Cambridge University Press has just published Samuel Johnson in Context, a collection of 47 short essays about the great lexicographer and his world. The book, which is aimed at a college and general audience, is edited by DSNA member Jack Lynch (also author of The Lexicographer’s Dilemma: The Evolution of English from Shakespeare to South Park [2009]). Lynda Mugglestone contributes an article on “Dictionaries” and Lisa Berglund,  the introductory chapter on “Life.” Visit the Cambridge UP website for a complete Table of Contents: http://www.cambridge.org/gb/knowledge/isbn/item6476720/?site_locale=en_GB 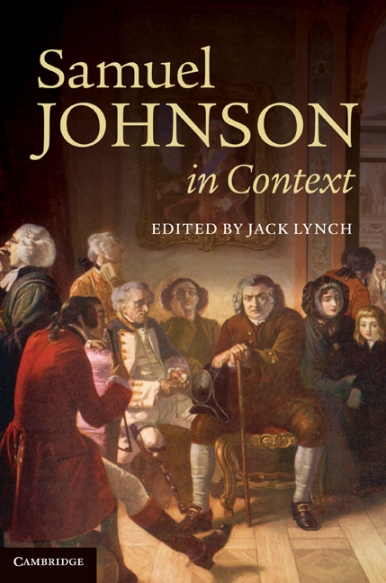 Few authors benefit from being set in their contemporary context more than Samuel Johnson. Samuel Johnson in Context is a guide to his world, offering readers a comprehensive account of eighteenth-century life and culture as it relates to his work. Short, lively and eminently readable chapters illuminate not only Johnson’s own life, writings and career, but the literary, critical, journalistic, social, political, scientific, artistic, medical and financial contexts in which his works came into being. Written by leading experts in Johnson and in eighteenth-century studies, these chapters offer both depth and range of information and suggestions for further study and research. Richly illustrated, with a chronology of Johnson’s life and works and an extensive bibliography, this book is a major new work of reference on eighteenth-century culture and the age of Johnson. [from CUP site]

And a review by Jonathan Bate: http://www.telegraph.co.uk/culture/books/biographyandmemoirreviews/8899313/Lives-of-the-Novelists-by-John-Sutherland-review.html

* Death Comes to Pemberley by P. D. James.  Listen to this interview on NPR:

[ok. I have finished this – will post a short review and a compilation of other reviews – very mixed – but most Austen people seem to be universally disappointed … a shame really – it should have been better…]

* This is a podcast on Jane Austen and the Body, with  Cheryl Kinney and Elisabeth Lenckos [and thanks to Diana B. for the link]: http://www.chicagohumanities.org/Genres/Literature/2010-Jane-Austen-and-the-Body.aspx

* From the Letter & Layout – the rest is cultural history blog: about the Macaroni and Theatrical Magazine, with some mention of Almacks:

* Austen characters resolutions at Austen Authors: I thought this was very good and a lot of fun – can you think of more? 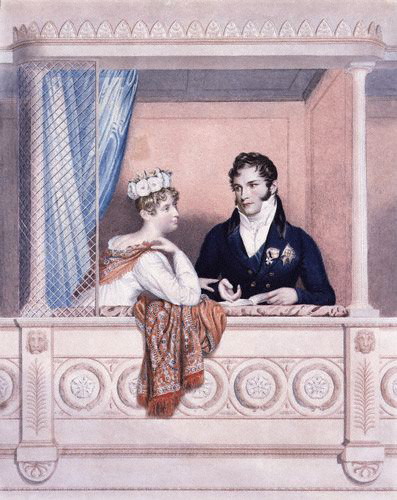 In the early nineteenth century two young women would occupy the position of ‘heir to the throne’ in quick succession. One died tragically early, while the other, born to replace her, went on to reign for over sixty years as Queen Victoria. Telling a tale of romance, sorrow and renewed hope, this display focuses on the fateful linkage in the history of Princess Charlotte of Wales and Princess Victoria of Kent, and how both their lives pivoted around Prince Leopold – beloved husband to one, and trusted uncle to the other.

Featuring a range of portraits in wax, watercolour, and print, as well as commemorative images, it includes an engraving of Princess Charlotte’s last portrait from life by Sir Thomas Lawrence, completed posthumously. By bringing together these images, the display traces the idealised nature of the imagery used to represent a young woman in direct line to the throne at a time when the nation tired of the debauched Prince Regent’s rule. [from the NPG website] 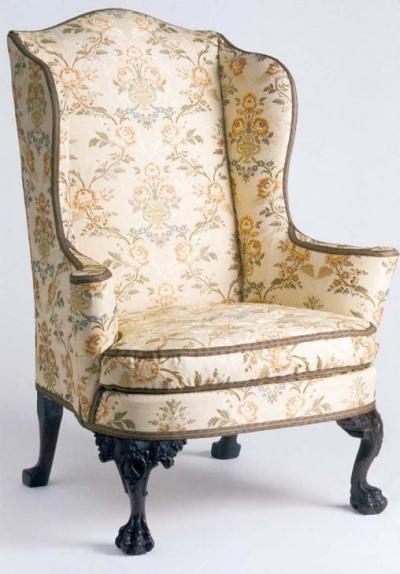 * An exhibition of recent acquisitions at Monash University– a memoir of a London pickpocket [George Barrington]:

* American Christmas Cards 1900-1960: by Kenneth Ames:  the exhibit at the Bard Graduate Center is now over, but you can read about it here:

and more about the book here: http://yalepress.wordpress.com/2011/12/13/for-the-card-carrying-shopper-kenneth-ames-on-christmas-cards/
Regency Life

* History Today – articles on Georgian England [many are for subscribers only, but there are several available to all]:  http://www.historytoday.com/early-modern-16th-18thc/georgian

And you can follow the Museum’s Textile Tuesday, a weekly post of a piece from their extensive textile collection : http://charlestonmuseum.tumblr.com/

Visit the blog of the Jane Austen House Museum [now penned by Julie Wakefield of Austenonly!] for a post on board games for the holidays – “Snakes and Ladders the Jane Austen Way” …

Enjoy the browsing! – let me know if you find anything interesting to share…