JASNA-Vermont celebrated in style this past Sunday at our annual Jane Austen Birthday Tea.  As always, a delicious repast of afternoon tea goodies catered by Champlain College with additional tasty holiday cookies by various JASNA members, made for a lovely afternoon of food and Austen conversation.

This year in celebration of the Bicentenary of Sense & Sensibility,  we welcomed Rebecca McLaughlin, lecturer at the University of Vermont, as she shared her insights on “A Second Chance for Sense and Sensibility ~ Marianne as Heroine.”

As part of the course offered at UVM Austen: Page and Film**, McLaughlin presented an interesting and insightful look at Sense and Sensibility from the standpoint of Marianne as the Heroine [which then of course makes Colonel Brandon the true Romantic Hero!, with which I heartily concur!], backing up all her views with text examples, scholarly interpretation, and film clips from the various adaptations.  This year we had the advantage of sitting at eight tables of eight with all engaged in lively discussion and much laughter as McLaughlin, in true college style, prompted us with questions and a quiz! * 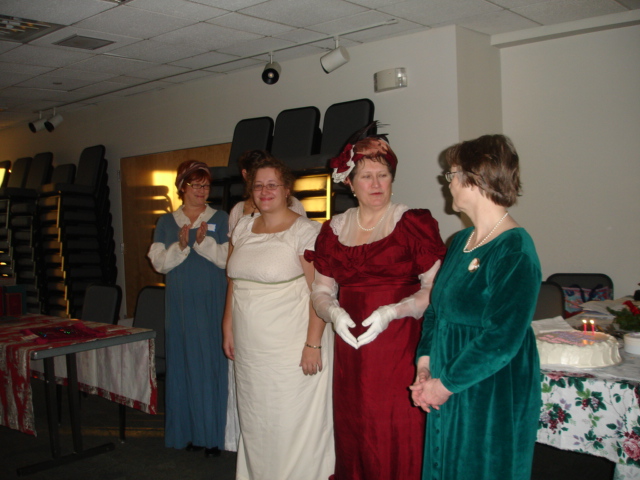 those who dressed for the occasion!

I think all there would agree that it was one of our best teas to date, the table arrangement being a great hit and Rebecca’s presentation one to remember – I do know that she has certainly prompted many to re-read their S&S with renewed vigor and plan into the night movie marathons of all six film adaptations! *** and perhaps even sign up for her next class,  sure proof that Jane Austen is alive and well in Vermont! 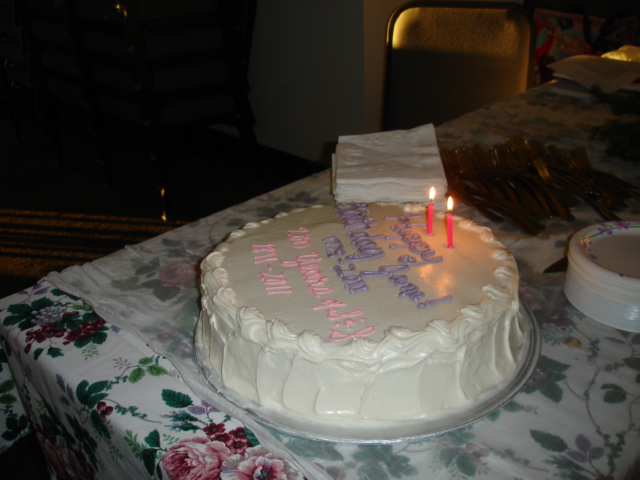 A thank you to all who so generously helped with baking and at the event – I could not do it without you, and mostly to Janeite Marcia for her work as Hospitality Maven, Treasurer and Keeper of the Mailing List! – and a hearty THANK YOU to Champlain College for their generosity in providing the room for us, and their superb catering team.  And finally, many thanks to Rebecca McLaughlin for sharing her love of Austen with us and making all feel like we were back in that ole’ college classroom, wondering whether to become English majors or not!

Alas! only a few pictures – with thanks to Janeite Margaret for adding to my very few taken – I need to remember to TAKE PICTURES at these things, especially of the Tea Table…. 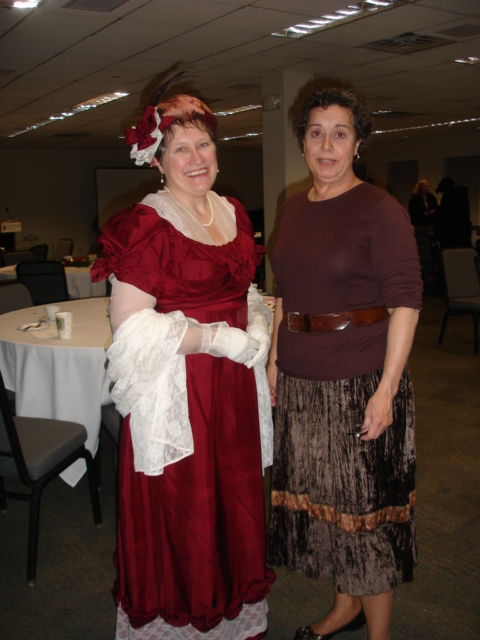 * Sense and Sensibility Quiz:
[scroll to the end for answers, but no cheating!]

1.   What was the original title of the story that would become Sense and Sensibility?

2.    How old is the story that we now know of as Sense and Sensibility?

3.    Originally, the story was written in letters; this style of novel is known as which of the following?

4.   Although revised from its original form, how many complete letters may be found within Sense and Sensibility?

5.   Which of the following is the narration style Austen uses in Sense and Sensibility?

6.   Which of the following characters notices that Edward is wearing a ring with a lock of hair in it when he visits Barton?

7.   How much is Colonel Brandon’s estate, Delaford, worth (in pounds)?

8.   Which of the following represents Marianne’s favorite maxim, or saying, within Sense and Sensibility?

**The course at UVM:  Austen: Page and Film will be offered online in the Summer 2012 semester.  Course description:

After nearly two centuries in print, Jane Austen’s works continue to enthrall us, whether in their original form or in the numerous television and film adaptations created since 1938. This course examines the role Austen played during her own time as well as the role she continues to play within our contemporary cultural imagination by analyzing four of Austen’s novels (Sense and Sensibility, Pride and Prejudice, MansfieldPark, and Emma) and by viewing faithful adaptations, reinterpretations and modernizations of each novel. We begin by placing each novel within its social and historical context, by defining themes that may help explain Austen’s modern appeal, and by creating our own vision of the action and characters. We then turn to the adaptations and investigate the historical moment of production, analyze changes to script and character, and think about how prose fiction differs from film in an attempt to understand the screenwriter’s choices and our current love of anything Austen. Course requirements include lively participation via blogs, reading quizzes, and a final written assignment.

*** The Six film adaptations of Sense and Sensbibility:
[ visit the JASNA site for details ]

Who is your favorite Colonel Brandon? 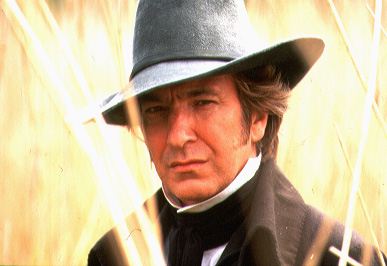 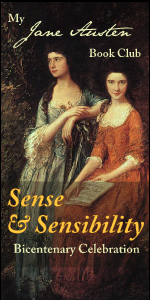 Maria Grazia at My Jane Austen Book Club is hosting a year-long celebration of the 200 year anniversary of the publication of Sense & Sensibility. Maria has invited twelve other Austen bloggers [including yours truly] to each post an article on Austen’s first published work.  Here is Maria’s invitation and the schedule:

October 2011 will mark the bicentenary of the publication of Jane Austen’s Sense and Sensibility. This is why ‘My Jane Austen Book Club’ wants to  dedicate a special space to the celebration and discussion of Austen’s first achievement as a published writer. I have invited some expert Janeites to contribute to the discussion and they have kindly and generously accepted . Katherine at November’s Autumn  and Gaskell Blog contributed the cute button on the left. Each month one of them will deal with a theme, a character, a topic somehow linked to Sense and Sensibility. The discussion will be open to you all with your comments, questions and suggestions. There will be a monthly giveaway and you will have the chance to win a book or DVD connected to our celebration. Here’s the schedule of our  virtual meetings. Take notes.

1.  January – “Marriage & Money in Sense & Sensibility” by Jennifer Becton – this article is now live on Maria’s site – If you comment  and leave your e-mail address on this first post or/and on the announcement of the Grand Event for Sense and Sensibility Bicentenary, you’ll be entered in the giveaway of The Three Weissmans of Westport by Cathleen Shine. This novel,  published by Picador,  is a new modern re-telling of Jane Austen’s Sense and Sensibility – this giveaway is for US readers only  but there will be others open worldwide. It ends 31st January. 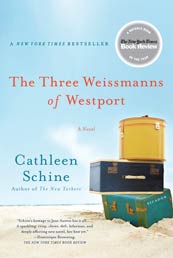 2.  February – “Sense and Sensibility on Screen” by Alexa Adams

6.  June – “Secrets in Sense & Sensibility” by Deb Barnum of Jane Austen in Vermont

8.  August – “Settling for the Compromise Marriage” by Regina Jeffers

12.  December – “Marianne Dashwood: A Passion for Dead Leaves & Other Sensibilities”  by Laurel Ann of Austenprose

A  year chock full of  S&S insights! – so check back to read these sure-to-be-interesting posts on S&S and a chance each month to win the latest giveaway.

There are also other Sense & Sensibility celebrations and blog tours – I will post on these another day – in the meantime, check out Jennifer Becton’s post on  “Marriage & Money in Sense & Sensibility”  at My Jane Austen Book Club.  With hearty thanks to Maria for setting this up!