Well, maybe not such strange bedfellows after all ~ Jane Austen did, as we all surely know, invent baseball [and here], so why not give her a well-deserved mention in Sports Illustrated?

I write this because my son went out of his way to drive over to my house just to show me what he assumed would be a glorious surprise – a Jane Austen siting that I surely couldn’t know about!  But alas! I had to tell him the truth that I already did know about not only the sale of The Watsons manuscript, but also the Sports Illustrated mention! – he is now more impressed than ever with my literary detective abilities, my ceaseless knowledge of everything and anything on Jane Austen [thank goodness for google alerts!] – but I felt that his efforts deserved a blog post, so here it is:

Price fetched at auction by Sheffield FC, the world’s oldest soccer club, for its printed and handwritten versions of the game’s original rules, which were drafted in 1858.

Price fetched at the same auction for the original draft of Jane Austen’s unfinished novel The Watsons.

Click here to see it on the page in SI: Austen Sports Illustrated

Now I realize the SI editors were just following the same auction and wanted to show the comparison between the value of some old soccor rules and classic literature, but can this mean that Jane Austen in the Swimsuit issue will not be far behind?

Update: the manuscript sold for £990,000 to the Bodleian Libraries of Oxford University [with a little help from The National Heritage Memorial Fund] – thanks to Tony Grant for this information in his comment below – here is the latest news from the BBC website: http://www.bbc.co.uk/news/entertainment-arts-14152092 [though they could have spelled Bodleian correctly!]

I am still on the road with little access – so thanks to Julie at Austenonly for the news that Jane Austen’s The Watson’s sold for over £850,000 this morning in London! – read Julie’s post here: http://austenonly.com/2011/07/14/the-watsons-sells-at-sothebys-in-london/ – stay tuned for the announcement of who bought it – apparently an institution – I would hazard a guess it is the Pierpont Morgan in New York City –  where the first pages of the manuscript are now housed – and though nothing against the Morgan, I guess I would prefer to see it at Chawton House Library, close to where it laid on a shelf somewhere in Chawton Cottage for a good number of years.

More later.  You can read my original post here:  https://janeausteninvermont.wordpress.com/2011/05/21/on-the-block-jane-austens-the-watsons/

Breaking news from The Guardian:  [and now all over the blogsphere!]

A rare, handwritten manuscript of Jane Austen’s unfinished novel The Watsons is to be sold at auction at Sotheby’s in London.

An incredibly rare handwritten manuscript of an unfinished novel by Jane Austen – the only one that is still in private hands – is to appear at auction inLondon.

The neatly written but heavily corrected pages are for her unfinished work The Watsons, a novel which many believe could easily have been as good as her six completed works.

Gabriel Heaton, Sotheby’s senior specialist in books and manuscripts, said it was “a thrill and privilege” to be selling it: “It is very exciting. This is the most significant Austen material to come on the market since the late 1980s.”

It is unquestionably rare. Original manuscripts of her published novels do not exist, aside from two cancelled chapters of Persuasion in the British Library.

The novel is considered around a quarter completed and the manuscript has 68 pages – hand-trimmed by Austen – which have been split up into 11 booklets.

It is most but not all of Austen’s unfinished novel. The first 12 pages were sold by an Austen descendent during the first world war to help the Red Cross and are now in New York’s Pierpont Morgan Library, while the next few pages were inexplicably lost by Queen Mary, University of London which has been looking after the manuscript.

The college’s director of library services Emma Bull said it happened six years ago, before she arrived, and had resulted in a full investigation which, alas, “did not really come to any firm conclusions about what specifically happened.” There had been a hope that they would turn up, but clearly that is now highly unlikely.

The Watsons manuscript shows how Austen’s other manuscripts must have looked. It also shines an interesting light on how she worked. Austen took a piece of paper, cut it in two and then folded over each half to make eight-page booklets. Then she would write, small neat handwriting leaving little room for corrections – of which there are many. “You can really see the mind at work with all the corrections and revisions,” said Heaton.

At one stage she crosses so much out that she starts a page again and pins it in. It seems, in Austen’s mind, her manuscript had to look like a book. “Writers often fall into two categories,” said Heaton. “The ones who fall into a moment of great inspiration and that’s it and then you have others who endlessly go back and write and tinker. Austen is clearly of the latter variety. It really is a wonderful, evocative document.”

The Watsons was written in 1804, not a hugely happy time for Austen professionally – she had one novel rejected and another bought by a publisher who failed to print it.

It was also a difficult time personally and one reason it was not finished may be because fact came too close to the fiction. The Watsons heroine is Emma, one of four sisters who are daughters of a sick and widowed clergyman. The novel would have had the father die leaving Emma in a precarious financial position. In real life, Austen’s clergyman father died leaving her in a similar pickle to her fictional heroine.

Had Austen completed The Watsons there are many who believe it would have been a classic. Margaret Drabble described it as “a tantalising, delightful and highly accomplished fragment, which must surely have proved the equal of her other six novels, had she finished it.”

The manuscript was bought by the present owner in 1988 when it was sold by the British Rail Pension Fund. It had been bought from Austen descendents in the 1970s when manuscripts, rare books and fine art seemed like perfectly sensible things for nationalised pension funds to buy.

You can see this page from The Watsons at the Pierpont Morgan Library’s online exhibition A Woman’s Wit: Jane Austen’s Life and Legacy: 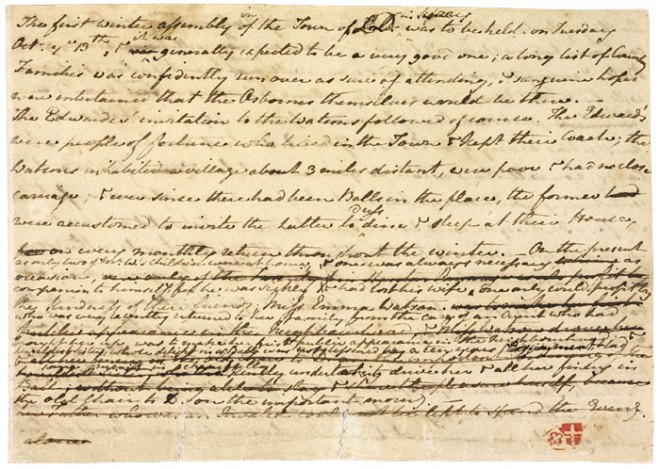 The Sotheby’s auction page is here, English Literature & History, Sale No. L11404, though there are no details yet online.  I will keep you posted! – and more on The Watsons in the coming weeks… you can read it online here at The Republic of Pemberley or a PDF version here,  or learn more about it here at Jane Austen’s Fiction Manuscripts where you can also read along with the digitized copy.