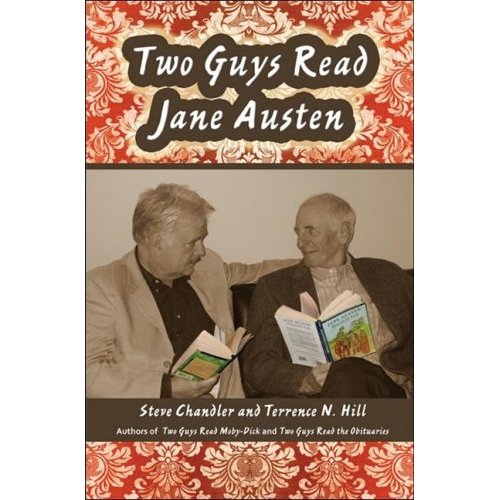 With women predominating JASNA-Vermont’s chapter, one question that continually arises is: What do MEN have to say about Jane Austen’s novels?? In the end, according to TWO GUYS READ JANE AUSTEN, the answer is multi-faceted and not always gender-specific.

TWO GUYS READ JANE AUSTEN is a delight, guaranteed to make the reader chuckle – and read certain sections out loud to anyone who will listen. Being quickly published proves a boon, as timely topics like Anne Hathaway and Becoming Jane are subjects of the first letters:

“…I was hoping you and Kathy could weigh in with an opinion. We just saw Anne in the film Becoming Jane ….Miranda didn’t much like her, but then, in my experience, Anne Hathaway is a bit of a litmus test. If you like her, you’re a man; if you don’t you’re a woman.”

The epistolary style of the book (email versus letters) recalls 84, Charing Cross Road, although the poignancy of that novel is missing. While readers will learn a bit about the lives of authors Steve Chandler and Terry Hill, it is for their quips and deeper thoughts on Jane Austen and Pride and Prejudice that will have you pulling this off the shelf for a re-read every once in a while. TWO GUYS READING JANE AUSTEN would be useful to many book groups; it would engender discussion on (especially) Pride and Prejudice.

Poor Mansfield Park gets short-changed by these Two Guys, which is a real pity. At this point, readers sense a desire to just finish the project and get the manuscript to the publisher. It does a genuine disservice to the half on P&P. Their discussion back and forth about aspects of the P&P characters, and turns in the plot mark some genuine reflection. Chandler had never read any Austen; Hill was well-acquainted but had not cracked open one of her novels in some time. This “discovery” versus “rediscovery” worked to the advantage of both men’s series of letters; and anyone willing to plough through an annotated P&P will appreciate the thoughts of Chandler, who was reading two versions (annotated and straight novel) at the same time.

Comments on P&P encompass reactions to character, favorite turns in the story, and amazement at Austen’s skill as a writer:

“[I]t is here [chapters 12-20] that Austen introduces one of her great comic characters in Mr. Collins, the ass-kissing, self-deluding buffoon of a clergyman. I’ll bet that by the time you read the end of the novel, you’ll find yourself laughing every time he makes an appearance. He reminds me of the Ted Knight character on the old ‘Mary Tyler Moore Show’.” [Hill; pp. 14-15]

“It’s a far better use of free time to sneak off and read Pride and Prejudice, in which a writer actually writes.” [Chandler; p. 18]

“This is I think a common flaw in women: They believe in the perfectibility of man. Specifically the man they intend to marry. They never marry the man before them; they marry the man they think they can turn him into. Men don’t think this way. And are happier for it.” [Hill; p. 35]

“It’s not as if I don’t know how it all ends; I mean I have read the book three times before. And yet here I am again absolutely wrapped up in the fates of the characters and thrilling to the sentences.” [Hill; p. 46]

“Darcy says, ‘For the liveliness of your mind I did.’ And indeed! For that is what we readers also admired her for the most…. So what characterizes Jane Austen for me is that she is a novelist of the mind. A writer who captures beautifully the interplay of intelligences….” [Chandler; p. 51]

If only this same care had been taken over their reading of Mansfield Park. As a lesser-loved novel nowadays (Austen’s own circle was fairly complementary of it), their choosing MP over Emma or Persuasion was a surprise; a welcome one at that. Then they give it this lack of attention. Fanny garners most of the comments, as the men discuss her character — as well as a new characterization or two: the 1999 film and the ITV production that showed on “Masterpiece” early in 2008.

“Would you say that our dear little Fanny, who is called a ‘creepmouse’ in the book by Tom Bertram, is in reality…a buxom, lusty, beaming big girl with tousled unruly blonde hair, huge energy and quick infectious laughter?” [Chandler; p. 86]

While the MP comments are welcome, because they consider at length film and – especially – Nabokov’s essay on the book, there is less delving into AUSTEN’s novel. A little less dash through Mansfield Park would have netted this little volume even more than a rating of: