Oh! where to begin?! As always, after a complete immersion into the long 18th-century, one is a bit befuddled for a few days, and notes, photographs, memories, and remembered conversations seem to exist in some parallel universe.  Since I am also on the road, and currently sitting in an airstream camper in the throes of a raging wind and rain storm pummeling the Oregon coast, I really AM not sure which universe I am in right now… so bear with me, as I try to do justice to the phenomenal JASNA Portland AGM! – four full days all about Northanger Abbey!

This is the first AGM I have attended without my best buddy Sara. We have been doing these annual gatherings since 1996 whenever our ridiculous schedules have allowed, but alas! this year, she was unable to be a part of it, so I ventured into potentially disastrous waters and suggested to Laurel Ann of Austenprose that we, though known to each other only through our respective Jane Austen blogs these past two+ years, we do not really know each other – I promised her a clean and neat, overly chatty, mildly snoring companion, and we decided to give it a go.  I have only been given a brief glimpse of Laurel Ann on her blog where she posted a picture of herself along side stack of Austen books in her employer Barnes & Noble store, but as I was walking down the street I spotted her a mile away and a new real time friendship was begun.  We of course got off to a beginning totally fitting for the promised weekend of “Mystery, Mayhem, and Muslin” by promptly getting stuck in the elevator – just the two of us – it stopped mid floor somewhere, lights went out, and then nothing, I mean nothing, for what of course seemed like ten minutes but was perhaps at most only thirty seconds – and then it started again – we thought this might be part of the ambience – but certainly never used THAT elevator again for the rest of the weekend [we did report it and saw no ill effects upon any other AGMers] – we did look around for a dead body, but then remembered there was only mystery, mayhem and muslin for the weekend, Murder not mentioned…

So for me, off to a meeting with the Persuasions editor, Susan Allen Ford, where we ended up conversing with one of the AGM volunteers on the joys of Georgette Heyer, had to shake ourselves to return to Jane – and then off to the Milsom Street Emporium – this year with lots of room, wonderful exhibitors – JASNA Regions tables [you should support them], Chawton House Library [you should join], Jane Austen’s Regency World Magazine [you should subscribe], antique shops, fashion displays, accessories for sale, and of course, my hangout, the BOOKS – Jane Austen Books and Traveler’s Tales [no website].  After loading up too many bags that caused worry to my back – off we went to the Portland Public Library for the exhibit “Lit Chicks: Verbal and Visual Satire in the Age of Jane Austen”  – first editons of Northanger Abbey, Emma, Persuasion, and Mansfield Park, several items of Frances Burney and other Regency works, and a number of Gillray’s cartoons – all this presented by Paula Stepankowsky, Marian La Beck and James Petts in the “Collins Gallery” – no relation to our Mr.Collins as far as we could tell – but the beauty of the architecture would more than have impressed even Lady Catherine.  Here are a few pictures of some of the books, a Francis Burney letter and a sampling of Gillray at his best –a wonderful collection and would like to have spent more time here without the crowd … I am hoping that a catalogue of the exhibition will be made available. 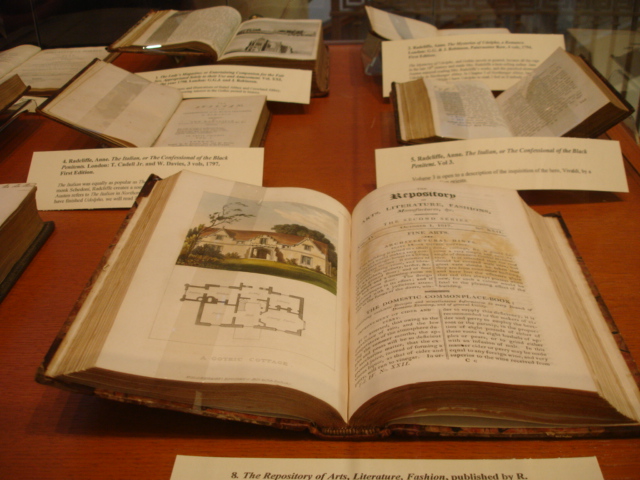 Repository of Arts, Literature and Fashion 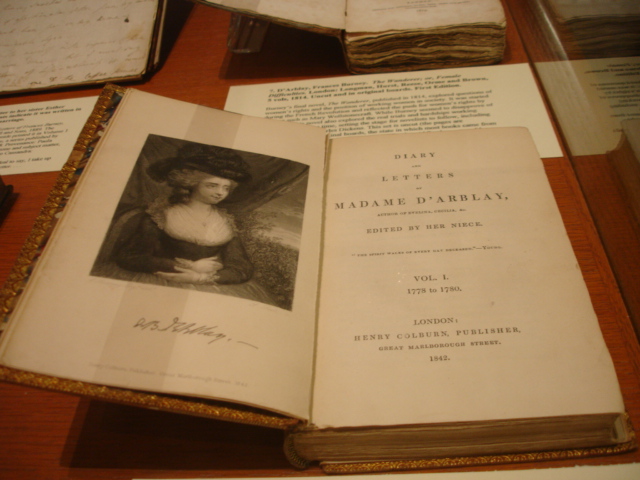 Gillray's take on the Prince Regent

A quick dinner with Laurel Ann at Pastini’s – perfect Italian meal, Chianti and all … and rush back to see the evening presentation by Angela Barlow, actress, in “Jane Austen and Character: An Actor’s View.” – Barlow gave us all a pure display of her talents, from invoking Mrs. Bennet and Mrs. Elton, to conveying to us the joys of being an actor and bringing a character of Austen’s to life, of reading the “temperature” of a character [how different the temperatures of a Fanny Price and a Catherine Morland!] – how her first advice to an actor is to “READ THE BOOK!” [oh! thank goodness!] – and after a delightful journey through a variety of Austen’s characters and musings on Austen as narrator, Barlow closed with an appreciation of Austen’s courage in her choice of heroines.  I was too far away to get a good shot, but if you ever have a chance to see Ms. Barlow, in anything, get thee hence to the theater! – I for one, would clammer for her as Mrs. Bennet – just perfect!

First day nearly done! Exhausted and happy – and then long chats with Laurel Ann to end the day!

Some pictures of the Milsom Street Emporium: 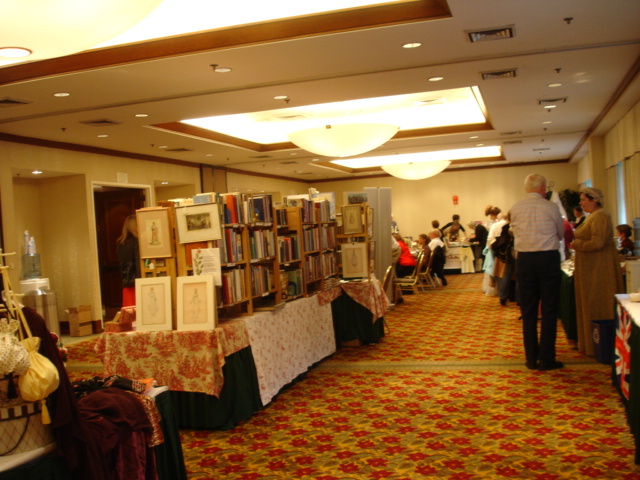 And some photos of a fashion display, all hand-made costumes by a JASNA member  – I don’t think I have ever seen such loveliness outside of a museum: 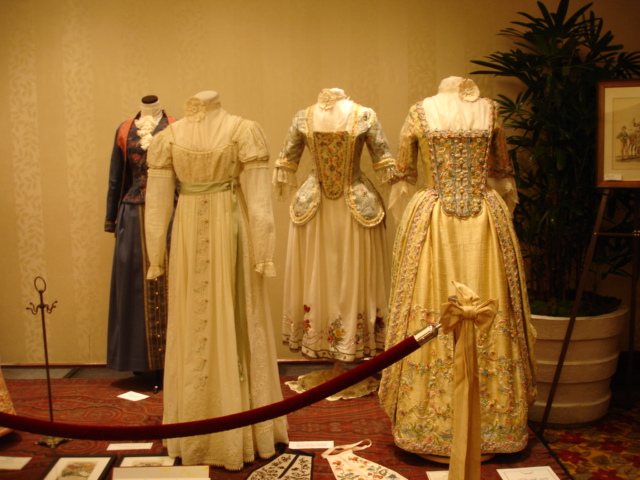 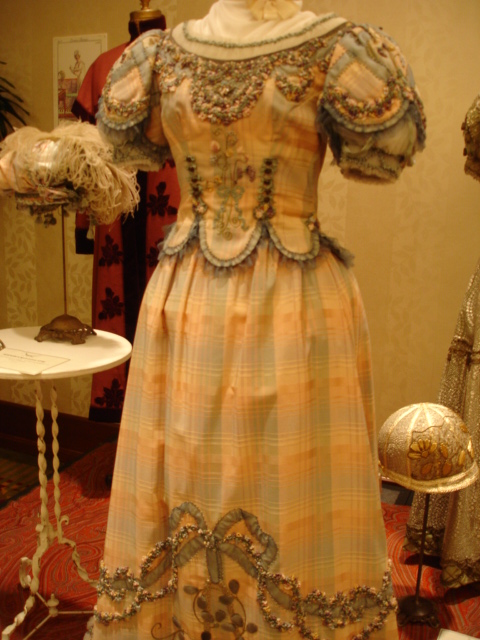 12 thoughts on “Jane Austen AGM ~ A Recap of ‘Mystery, Mayhem, and Muslin in Portland’!”