All of Jane Austen’s novels have direct quotations or echoes from Shakespeare’s plays but Jane Austen goes into overdrive with Mansfield Park.

The Wilderness and A Midsummer Night’s Dream: When they all go to Sotherton and stroll towards the Ha Ha, the barred gate and the wilderness beyond we see that various pairings are made, official or unofficial, and broken up, and reformed again, with Fanny as silent observer but only of part, and couples returning “from the woods” claim to have ‘been lost’ or have ‘forgotten time’ so there is more than an echo of A Midsummer Night’s Dream in amongst it all. 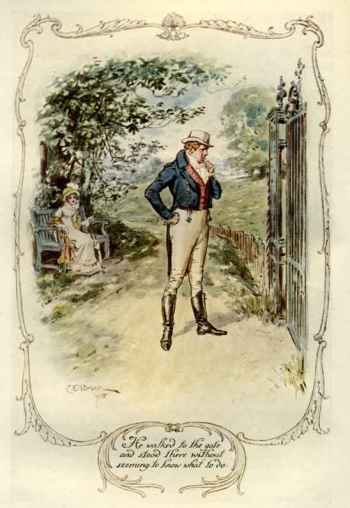 There has been a mountain of interest displayed down the years in the prank played by Maria in wrong-footing the poor hapless Mr Rushworth who is sent away for a key whilst she takes an opportunity to squeeze through the bars and into the freedom of the wilderness beyond. Fanny’s pleas for patience and caution are ignored. On Mr Rushworth’s side of the fence we have his house and his mother, and all the feelings of restraint from manners, rules, etiquette and standards of behaviour to keep to. Gaining access to comparative freedom by an escape seemingly on an irresistible impulse takes Maria past the formidable barriers of the iron gates the bars of the fence and the Ha Ha, and even at the risk of tearing her clothes she effectively abandons herself to the freedom of being alone with Henry. Most commentators who wish for more “hanky panky” than is evident make a lot of this allusion to the renting of clothing. However, unlike the “great slit in my worked muslin gown” that Lydia in Pride and Prejudice wants Sally to mend – which is an actual slit and therefore an allusion to an event already taken place – Maria actually gets through unscathed. Acting with Mr Crawford’s encouragement Maria puts herself “out-of-bounds” and Henry follows immediately. It is significant that their first action is not to do what they claimed was their motivation and which would keep them in sight. They do not go up to the copse of trees so as to turn and survey the house from there. No, they disappear out of sight immediately. Every reader is free to think for themselves what Edmund and Mary on one side and Henry and Maria on the other actually get up to, all unobserved in the woods and wilderness and let us just leave it that time, opportunity and inclinations were all there for use and mischief. Certainly Shakespeare mentions the opportunities that present themselves with Lysander, Demetrius, Helena and Hermia, who are all discovered asleep together in the woods, and on waking have difficulty still in separating dream from reality. However, in Mansfield Park there is no after affect visible on person, clothing or behaviour and no future considerations are mentioned as affecting their various thoughts and feelings in later chapters. So we may conclude that very little happened, or at least I do! Others may disagree – and suggest quite a lot went on.

Plot Structure and King Lear: There are echoes of Alls Well That Ends Well in Mansfield Park but most critics would plump for King Lear as having most resonance. In both plot structures we have an authoritarian father who does not know his children, or anything else as he should, and who loses his authority by overestimating his eldest daughters and undervaluing the youngest (although Fanny is not Sir Thomas Bertram’s natural daughter she is to all intents and purposes being treated as such, accept by Mrs Norris). In King Lear, Regan and Goneril are rivals for the treacherous Edmund just as Julia and Maria are rivals for Henry Crawford. Cordelia rejects Lear’s auctioning of her affections and gets a “Nothing comes from nothing” response and Fanny rejects Sir Thomas’s encouragement to accept Henry Crawford. Both Cordelia and Fanny, the youngest daughters, are misunderstood, or not listened to properly and are certainly not trusted. They are accordingly banished in punishment. Both are accused of ingratitude.

However, Fanny is recognised as the daughter he always wanted by Sir Thomas, who in the end has revised many opinions based on experience. The fates do not spare Cordelia or King Lear and they ‘enjoy’ grim ends.

We have the Bertram brothers talking of plays they read as boys and list: Henry VIII, Julius Caesar and Hamlet when Tom tries to use them in claiming his Father’s encouragement to theatricals! Sir Thomas had instead thought of them more as an aid for diction and good material for young men to work with as useful preparation for speaking in public. Jane Austen shows her belief in the power of Shakespeare’s work by the conversation between Henry Crawford and Edmund in Mansfield Park. As Henry Crawford and Edmund seem to hardly agree on anything we can interpret their agreement on Shakespeare as being Jane Austen’s authorial voice showing through (in a similar fashion to the defence of the Novel in Northanger Abbey) as we hear Edmund say:

“That play must be a favourite with you”, said he; “You read it as if you knew it well.” “It will be a favourite I believe from this hour,” replied Crawford; – “but I do not think I have had a volume of Shakespeare in my hand before, since I was fifteen. – I once saw Henry VIII acted. – Or I have heard it from someone who did – I am not certain which. But Shakespeare one gets acquainted with without knowing how. It is part of an English-man’s constitution. His thoughts and beauties are so spread abroad that one touches them every where, one is intimate with him by instinct. – No man of any brain can open at a good part of one of his plays, without falling into the flow of his meaning immediately.”

“No doubt, one is familiar with Shakespeare in a degree.” said Edmund, “from one’s earliest years. His celebrated passages are quoted by everybody, they are in half the books we open and we all talk Shakespeare use his similes and describe with his descriptions . . . . .”

And so Jane Austen is telling us that Shakespeare’s influence is all-pervading and that his plays are well-known to every educated person, whilst subtly giving doubtful sincerity to Crawford’s lines.

Critics in Jane Austen’s time made reference to Shakespeare when commenting on her novels. As Paula Byrne mentions, a critic in the Quarterly Review in 1821, just four years after Austen’s death, compared Jane Austen’s art to Shakespeare’s. “Saying as little as possible in her own person and giving a dramatic air to the narrative by introducing frequent conversation,” she created in her fictional world “with regard to character hardly exceeded even by Shakespeare himself.”

Yet another 19th Century writer, Thomas Lister, ascribed her genius to revelation of character through dramatic dialogue, “She possessed the rare and difficult art of making readers intimately acquainted with the character of all whom she describes . . . . . . she scarcely does more than make them act and talk and we know them directly.”

Henry Crawford’s Choices of Parts: When they get into the theatricals it is interesting just which characters Henry Crawford picks out as parts he could readily play bearing in mind he has a free choice. He starts with Richard III, then he suggests Shylock from The Merchant of Venice and finally the singing hero of a farce in his scarlet coat and cocked hat. Is this Jane Austen suggesting he will act as either the villain or the fool in this novel?

Before they settle upon Lovers’ Vows they look at and reject: Hamlet, Othello and Macbeth.

Henry VIII: Later we have Henry Crawford thrilling Fanny, and even stirring Lady Bertram (which I think all will agree takes some doing), with his reading of Henry VIII. Once again, is this a subtle hint from Jane Austen? Henry VIII, in this play wavers between the virtuous but passive Queen Katherine and the vivacious, lively Anne Boleyn; and so should we expect Henry Crawford to act the same way when comparing Fanny with Maria? We know which one the King ends up with, and that it doesn’t last.

Merchant of Venice: Fanny is standing by a window admiring nature and saying its delights are superior to music and art and draws Edmund away from the ‘Glee’ by saying as she looks at the stars, “In such a night as this” which matches a line from The Merchant of Venice and a conversation between Lorenzo and Jessica in Act 5 Scene 1 as they stand in the avenue before Portia’s house. The full passage is:

The moon shines bright: in such a night as this,
When the sweet wind did gently kiss the trees
And they did make no noise, in such a night
Troilus methinks mounted the Troyan walls
And sigh’d his soul toward the Grecian tents,
Where Cressid lay that night.

In such a night
Did Thisbe fearfully o’ertrip the dew
And saw the lion’s shadow ere himself
And ran dismay’d away.

In such a night
Stood Dido with a willow in her hand
Upon the wild sea banks and waft her love
To come again to Carthage.

In such a night Medea gather’d the enchanted herbs
That did renew old Aeson.

In such a night
Did Jessica steal from the wealthy Jew
And with an unthrift love did run from Venice
As far as Belmont.

In such a night
Did young Lorenzo swear he loved her well,
Stealing her soul with many vows of faith
And ne’er a true one.

In such a night
Did pretty Jessica, like a little shrew,
Slander her love, and he forgave it her.

I would out-night you, did no body come;
But, hark, I hear the footing of a man.   [Enter STEPHANO]

Now this allusion is very striking. Not only during this passage is the belling of “in such a night” very suggestive as we hear it eight times going through a listing of famous lovers. In almost all the pairings there is eventual betrayal by one or other and so they are all “star-crossed” lovers.

So, Jane Austen is alluding to the recurring theme of lovers and looming tragedy, and we therefore wonder what is in store for Shakespeare’s Lorenzo and Jessica as well as the love triangle of Edmund, Fanny and Mary Crawford.

“It is a great while since we have had any star-gazing.” The glee began. “We will stay till this is finished, Fanny,”
said [Edmund], turning his back on the window.
[Joan Hassall, Mansfield Park – Pemberley.com]

So is it meant to be significant that rather than stay and enjoy the quiet contemplative joys with Fanny, Edmund chooses to withdraw back into the room drawn by the music the singing group and Mary Crawford’s more vivacious charms, leaving Fanny isolated at the window?

Going by the Shakespeare allusion is it this first pairing that will fail? Jane Austen leaves it to us to judge; that is if we’ve noticed!

Sources read as background or alluded to in this paper:

Any comments or questions for Chris? – please reply below, and stay tuned for Part III, where Chris will share his thoughts on Mrs. Norris!