Join us today for a guest post by Sue Wilkes, as she shares one of her spy tales from her new book Regency Spies: Secret Histories of Britain’s Rebels & Revolutionaries (more information on the book below).

The year 1820 began with grave news – the death of George III on 29 January, after years of illness. The King was buried a week later with great pomp and ceremony on 16 February. But his son George IV’s reign did not get off to a good start. A week later, news broke to an astounded British public of the arrest of ‘a gang of diabolical ruffians’ at Cato Street, in London. The conspirators, led by the ‘notorious’ Arthur Thistlewood, planned to kill members of the Cabinet (government ministers) while they dined at Earl Harrowby’s house in Mansfield Street (Gentleman’s Magazine, February 1820).

This was no chance discovery, however. Thistlewood and his gang were well known to the authorities – the government’s spies had kept them under surveillance for years. Arthur Thistlewood, a brooding, dangerous man known to be deadly with a sword, led a group of revolutionaries called the ‘Spencean Philanthropists’.

The Spenceans were followers of the late Thomas Spence, who advocated the common ownership of all land – a truly anarchic idea in an unequal society rooted in land, wealth and property. Thistlewood first came to prominence in the Spa Fields riot of December 1816 in London. The riot was thought to be a ‘trial run’ by the Spenceans to see if they could get enough popular support to attack the Tower of London, Bank of England, and seize the city. Thistlewood and his friends were arrested and tried for treason the following year, but acquitted as most of the evidence against them was based on unreliable spy evidence.

After his release from prison, Thistlewood and his followers were constantly watched. In 1817 a spy called Shegoe reported, ‘They entertain the plan of assassination, and Lords Castlereagh, Sidmouth, Liverpool and Ellenborough have been marked as objects of their pursuit’. Some conspirators guessed that Shegoe was a spy, however, and his usefulness declined.

A new spy, George Edwards (code-name ‘W—r’ in the surveillance reports) infiltrated the gang and actively encouraged their plans. Edwards also recruited more conspirators: one of the people he ‘groomed’ was John Thomas Brunt, a shoe-maker. Another was Richard Tidd, who came from Thistlewood’s native Lincolnshire, and met Edwards through Brunt. Edwards’ actions and words were so ludicrously violent that several men he approached sent him packing, convinced that he was trying to entrap them.

Early in 1820, Edwards brought Thistlewood the news he had been waiting for: a Cabinet dinner was planned at Lord Harrowby’s house. Thistlewood and his gang rented a loft in Cato Street. They arranged to meet on Tuesday 22 February, bringing as many weapons as they could lay their hands on. But thanks to Edwards, the time and place for the planned assassination were already known to the police and Home Office. Everything was now set to nip the conspiracy in the bud.

On Monday 1 May 1820, Arthur Thistlewood, James Ings, John Thomas Brunt, Richard Tidd and William Davidson were executed guilty for high treason at Newgate. But was it really Thistlewood’s idea to kill the Cabinet – or was it the spy George Edwards’s plan, as Arthur claimed at his trial? 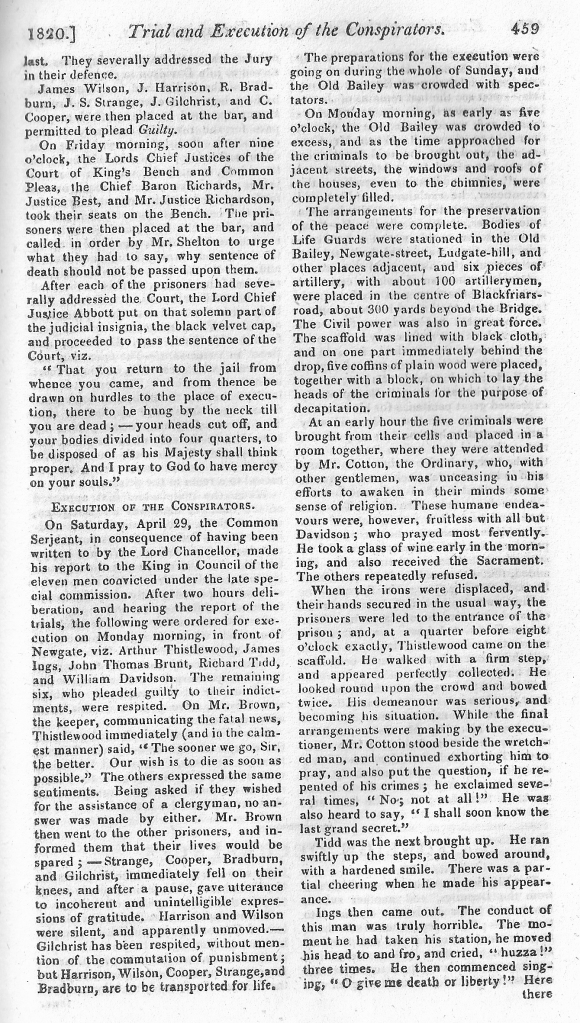 An account of the death sentence passed by the judge, and the conspirators’ execution,
from the Gentleman’s Magazine, May 1820. (Author’s collection).

About the book: [from the jacket]

In her new book, Sue Wilkes reveals the shadowy world of Britain’s spies, rebels and secret societies from the late 1780s until 1820. Drawing on contemporary literature and official records, Wilkes unmasks the real conspirators and tells the tragic stories of the unwitting victims sent to the gallows.

In this ‘age of Revolutions’, when the French fought for liberty, Britain’s upper classes feared revolution was imminent. Thomas Paine’s incendiary Rights of Man called men to overthrow governments which did not safeguard their rights. Were Jacobins and Radical reformers in England and Scotland secretly plotting rebellion? Ireland, too, was a seething cauldron of unrest, its impoverished people oppressed by their Protestant masters.

Britain’s governing elite could not rely on the armed services – even Royal Navy crews mutinied over brutal conditions. To keep the nation safe, a ‘war chest’ of secret service money funded a network of spies to uncover potential rebels amongst the underprivileged masses. It had some famous successes: dashing Colonel Despard, friend of Lord Nelson, was executed for treason. Sometimes in the deadly game of cat-and-mouse between spies and their prey suspicion fell on the wrong men, like poets Wordsworth and Coleridge.

Even peaceful reformers risked arrest for sedition. Political meetings like Manchester’s ‘Peterloo’ were ruthlessly suppressed, and innocent blood spilt. Repression bred resentment – and a diabolical plot was born. The stakes were incredibly high: rebels suffered the horrors of a traitor’s death when found guilty. Some conspirators’ secrets died with them on the scaffold…

Read her blogs at:

Thank you Sue for telling us about one your tales! This book is filled with such – I will be interviewing Sue in the coming weeks, so please return to learn more about this world of spies in Jane Austen’s time … my first question? Whatever would our dear Henry Tilney have to say about it all?! 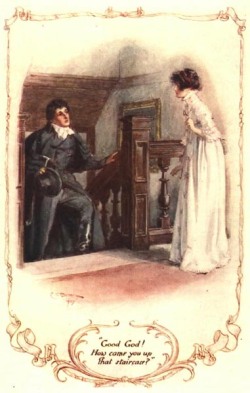 Dear Miss Morland, consider the dreadful nature of the suspicions you have entertained. What have you been judging from? Remember the country and the age in which we live. Remember that we are English, that we are Christians. Consult your own understanding, your own sense of the probable, your own observation of what is passing around you. Does our education prepare us for such atrocities? Do our laws connive at them? Could they be perpetrated without being known, in a country like this, where social and literary intercourse is on such a footing, where every man is surrounded by a neighbourhood of voluntary spies, and where roads and newspapers lay everything open? Dearest Miss Morland, what ideas have you been admitting?”
[NA, Vol. II, Ch ix. Image: Mollands.net]