Most of us who read Jane Austen are always seeking new titles to read, and ways to answer the 200-year old question of “what to read when you have finished all of Jane Austen.”  Other than the almost mandatory requirement to RE-READ Austen whenever possible, it is a “truth universally acknowledged” that an Austen reader will be soon in want of another book!   I have seen many such lists and though always subjective to the list-maker, they are a great start.  But what about Austen’s own reading?  A number of articles have been written on this, as much is known from her letters, but as our JASNA-Vermont Chapter recently had a meeting and discussion on Northanger Abbey, and we know that NA was Austen’s tribute to the novel and reading, I would like to provide a list of books she actually cites throughout NA….it is an illuminating compilation and should keep us all busy for the next year at least!  [ please note that there is no particular order to this list…. and if I have left anything out, please let me know!]

The Northanger Canon [ i.e. the “Horrid” Novels as referenced by Isabella Thorpe in Chapter 6 of NA]; also see the article describing each book in more detail at The University of Virginia’s Gothic Books Collection.

Other titles cited in Northanger Abbey:

1. “Literary Allusions in Jane Austen’s Writings” at The Republic of Pemberley (mostly compiled from Chapman’s indexes)

2. Ehrenpreis, Anne Henry.  “Introduction to Northanger Abbey“ [ Penguin, 1972 ].  An excellent introduction to the novel, with notes on all the books cited by Austen, with a nice discussion of the “horrid” novels as well as references to other works cited in the novel.

3.  Chapman, R.W.  Indexes to Northanger Abbey and Persuasion [ volume 5 of his edition ]

I am a lover of booklists, and here is one from Ms. Place on Jane Austen’s World Blog (taken partially from the Big Read on the BBC,  and several other blogs)…  I repeat this here and send it out to you all…a great list, so follow the instructions and see where you have been and where you might go on your reading journey….

(though I do have to add that this is not a list of the 100 BEST books by any means…it seems an interesting compilation of classics and a number of contemporary titles that are not perhaps the best literature, but good reads…there are also some very obvious errors and omissions…, but one cannot quibble with any such list…it is always subjective and bears the bias of the listmaker….but a great place to start in case you need a push.  I also find it hard to believe that the average adult has only read SIX of these titles?  Yikes!   So I append the list with none of my markings as yet…I will post my results in a comment.  So let’s hear from you and what your reading score might be….

“The Big Read reckons that the average adult has only read 6 of the top 100 books they’ve printed.
1) Look at the list and bold those you have read.
2) Italicize those you intend to read.
3) Underline the books you love.
4) Strike out the books you have no intention of ever reading, or were forced to read at school and hated.
5) Reprint this list in your own blog so we can try and track down these people who’ve only read 6 and force books upon them.”

I was having dinner with a great buddy the other night and we of course got talking about Jane Austen, as we are wont to do….we have both been reading Austen for a good number of years, attend the annual JASNA meetings together, and discuss the latest movies, occasionally disagreeing, but have terrific conversations nonetheless.  We most often quibble over Fanny Price and Mansfield Park (she dislikes Fanny with a passion, loves Mary & Henry Crawford and hence the whole book tends to lose its bite!) … I have told her that there is now a wonderful new Blog just about Mansfield Park, but alas! she does not care….

But our discussion the other night, with my very NOT Austen-loving husband in rapt attention, tended to the very basic question of “why is Jane Austen so popular right now?”  We can say that the movies and Hollywood are driving the popular culture, that Colin Firth as Darcy has changed the face of the romantic hero for all time, that she has always been popular so what’s all the fuss, that she gives us a respite in the world of computers and television and cell phones and ipods always THERE demanding our attention, that her writing is so superb we cannot but read and re-read because there is nothing to compare, her wit and social commentary are unparalleled, etc., etc. …. there is no one answer for sure….but I thought I would put this to the blog test and see what sort of response we can get from the cyberspace world out there that is filled with Austen blogs, sites, comments, articles…and just give you all a chance to wax poetic on this very basic thought:  why IS Austen so popular now? and why are her 6 novels (plus all the other wonderful jottings) on YOUR reading pile?  Any thoughts and comments appreciated….especially from those who might be better than me at convincing my friend that Mansfield Park is quite a delightful book after all!

[there is a great article on this question at the Masterpiece Theatre site, titled Why Jane? Why Now? ] 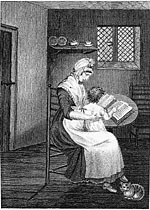 The Reading Experience Database 1450-1945 is a project the Open University (UK) launched in 1996, with the aim of accumulating data about the reading experience of British subjects.  It is a searchable database of all citations in printed materials (i.e. letters, memoirs, diaries, journals, reading notebooks, autobiographies, court records, annotations, marginalia, etc.) linking an individual to their reading.  An example is Susan Ferrier, who commented in a letter on reading Jane Austen’s Emma in 1816, and there are many citations to Jane Austen’s own reading.  This material is already prompting the need for a reassessment of the opinions about 18th and 19th century reading practices.  For instance, the belief that 19th-century women read nothing but novels is disputed by the findings that women of this period read an extremely wide range of genres, including philosophy, mathematics and the Classics.  You can find the link at:  http://www.open.ac.uk/Arts/RED/index.html (the link is also in our ‘Literary Resources” list.) And note that RED actively solicits contributions of material for inclusion in the database. 1