News from the Editor of  Jane Austen’s Regency World magazine: the September/October 2010 issue is published this week: 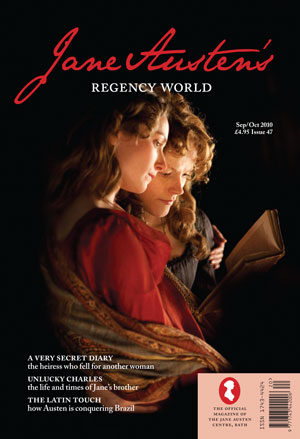 Featured on the cover is a scene from The Secret Diary of Anne Lister, the BBC’s new drama about a Georgian heiress who follows an unconventional path in life and love.

Highlights of the new issue of the magazine include:

Full details of Jane Austen’s Regency World Magazine, which is published every two months, are available on our website http://www.janeaustenmagazine.co.uk/

Jane Austen’s Regency World Magazine is also delighted to announce that it will be at the following events:

Readers are invited to visit our stand and say hello!

[Posted by Deb, who will write more on this when it shows up in her mailbox…]