The “Thomas Lawrence: Regency Power and Brilliance”  exhibit that closed in late January at the National Portrait Gallery in London, will be opening on February 24 [through June 5, 2011] at the Yale Center for British Art in New Haven, CT.  For those of you, like me, who were unable to catch this in London, now is your chance – not to be missed, certainly for any Jane Austen fan in good standing!  – [and thankfully, not too far from me! – I will post my thoughts after seeing it…]

This is from the Yale Center for British Art website:

Thomas Lawrence: Regency Power and Brilliance will be the first substantial examination of the artist in the United States since 1993 and the first Lawrence exhibition in the United Kingdom since 1979. It will include the artist’s greatest paintings and drawings alongside lesser-known works in order to provide a fresh understanding of Lawrence and his career. The show will also contrast his approach to sitters according to age and gender; juxtapose his public identity with the private world of the artist’s studio; explore Lawrence’s technical innovations as a draftsman and painter; and place him within the broader contexts of the aesthetic debates, networks of patronage, and international politics of his day. The exhibition will bring visitors “behind the scenes” to explore Lawrence’s working methods and the importance of his studio as a workspace, a social space in London, and a space for the display of Lawrence’s own works and his stellar collection of Old Master drawings.

Spanning the scope of the artist’s career, the exhibition closely examines the Regency period, a time defined by the political and cultural role played by George IV (1762-1830), who was Prince of Wales between 1789 and 1811, and then, successively, Prince Regent (during his father’s illness between 1811 and 1820), and crowned king after his father’s death. The exhibition begins with a restaging of Lawrence’s first definitive Royal Academy success in 1790, where he showed Elizabeth Farren (Metropolitan Museum of Art) and Queen Charlotte (National Gallery of Art, London). A display of works from Lawrence’s controversial exhibitions from the 1790s will follow, including Arthur Atherley (Los Angeles County Museum of Art), which challenged traditional notions of masculinity. The next section will examine the period from 1805 to 1815, during which the artist experienced financial and emotional turmoil and created his most innovative and experimental group portraits and half-history portraits. Lawrence was sent abroad by the Prince Regent to paint the victors of Waterloo between 1818 and 1820, and a section of the exhibition will feature portraits such as Arthur Wellesley, 1st Duke of Wellington (private collection) and Charles William (Vane-)Stewart, later 3rd Marquess of Londonderry (National Portrait Gallery, London), as well as the innovative chalk-on-canvas drawings he made during his travels. 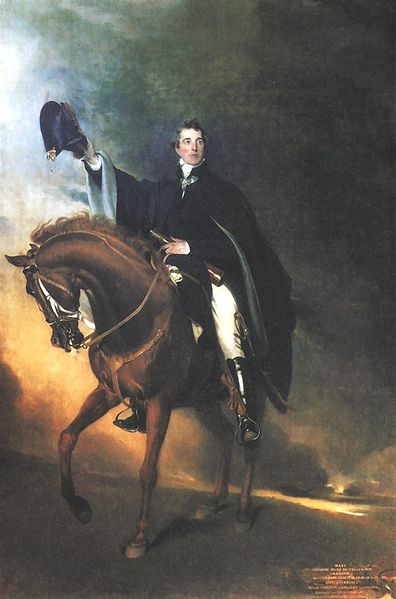 Duke of Wellingon on Copenhagen

Another display will include some of his best works on paper, ranging from friendship portraits and commissioned portrait drawings to sketches of historical events, such as the treason trial of John Thelwall (National Portrait Gallery, London). Sparked by a drawing of his studio in 1824 (Yale Center for British Art), the last section of the exhibition will explore new paradigms of masculinity and femininity in Lawrence’s later work and also examine the importance of his portraits of children. The section proves definitively that Lawrence continued to challenge himself as an artist even in the last decade of his career. This display will also highlight an important portrait of the young Julia Peel (private collection), which will be shown exclusively in New Haven. Yale Center for British Art Director, Amy Meyers, asserts, “A critic once wrote of Lawrence’s work that ‘The magic of his art is thrown around the representations of the most ordinary things.’ We are thrilled to be able to share this magic with visitors drawn to the show by the beauty of Lawrence’s paintings, by interest in the period of the Napoleonic wars, and by the changing representations of gender roles in Lawrence’s work.”

Beginning as a child prodigy working in pastels, Thomas Lawrence succeeded Sir Joshua Reynolds as Britain’s greatest portrait painter. While lacking in formal and artistic education, he rose to the highest ranks of his profession and was appointed President of the Royal Academy in 1820. With the temperament and flair to capture the glamour of the age, Lawrence created the image of Regency high society with dazzling brushwork and innovative use of color. He became not only the most popular chronicler of fashionable London society, but also one of the most lauded (and imitated) portraitists in Europe. Under his brush, portraits emerged that were both startlingly modern, yet grounded in historical forms. They owed their popularity to the fact that Lawrence represented his sitter’s idealized social persona, and also attempted to capture in paint a visual representation of their inner life and character.

Thomas Lawrence: Regency Power and Brilliance has been curated by A. Cassandra Albinson, Associate Curator of Paintings and Sculpture at the Yale Center for British Art, and Peter Funnell, 19th Century Curator and Head of Research Programmes, and Lucy Peltz, 18th Century Curator, at the National Portrait Gallery, London.

The exhibition is accompanied by a fully illustrated book, edited by A. Cassandra Albinson, Peter Funnell, and Lucy Peltz, with essays by Albinson, Funnell, and Marcia Pointon. The book has been published by the Yale Center for British Art in association with Yale University Press and will be available for purchase in the museum shop.