A few words of praise for Margaret Sullivan, famed “Editrix” of Austenblog, developer of Molland’s, personal blogger at Tilney and Trap Doors, and authoress:

Her Jane Austen Handbook, first published in 2007 will be re-released in early March 2011 by Quirk Books.  Note that this is not a new edition; it has the same content with just a change in the subtitle from “A Sensible Yet Elegant Guide to Her World” to “Proper Life Skills from Regency England”.  There is a new cover design and a change from turquoise to a cocoa brown for text and illustations.  The illustrations by Kathryn Rathke are a delight.  All text and references are exactly the same, alerting you to such important concerns as:

Certainly all necessary rules of etiquette we could all still learn and apply today ~ I for one do lament the loss of the letter-writing culture…!

An Appendix includes a short biography of Austen, a page summary of the novels and other works, and a few words on the film adaptations.  A short list of Resources, a very select Bibliography, a Glossary and index round it all out.

If you didn’t get this book the first time around, don’t miss out again – it is a  must-have addition to your Austen collection – fun and informative [card games, dances, fashion, needlework, all manner of Regency social life and customs!], and filled with Sullivan’s well-known wit:

It is a truth universally acknowledged that in this world there are haves and have-nots.  Some are born to marry a man with ten thousand a year and have jewels and pin money second to none; some are destined to teach that woman’s children and be patronized by her servants.  In the sad event that you are forced to seek employment, here are a few acceptable ways for you to do so.  All are ill-paid and unpleasant in their own way and should be avoided if at all possible.   [She then outlines the following]

Fortunately for us, Sullivan chose the latter, perhaps because, as her dedication so lovingly conveys, “For my mother, who let me read everything.”  We should all follow such sage advice! 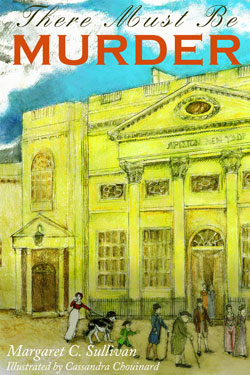 I am late to the table one this one, but here ‘s another shout-out about Sullivan’s also recently re-published novella There Must Be Murder, a sequel to Northanger Abbey – as noted in her article in the latest JASNA News (Vol. 26, No. 3, Winter 2010), it is available from Librifiles.com  as a hardcopy [also at Amazon] and as a free ebook from Girlebooks.com  .  [It is also available on the Jane Austen Centre website where it was first published.]

So I added this to my Kindle and have had the most enjoyable time with Henry and Catherine as they return to Bath shortly after their marriage – filled with Tilney’s expected wit and humor, Catherine’s laughing at her own efforts to not be temped into gothic thinking, an almost romantic General Tilney pursuing a lovely Bath widow, a possible rival for Henry’s attentions, a fair bit about Henry’s newfoundland much appreciated by dog-lovers everywhere, and a possible murder indeed [no spoilers here!].  The illustrations by Cassandra Chouinard are a perfect accompaniment to this fun read – who can resist a few hours with Henry Tilney! ~  highly recommended.