Browsing around an antique shop last week, I spotted a boxed set of six Pimpernel coasters, each coaster’s image an engraving of a British Heritage site in Kent, and all bordered by red and gold bands.

Not sure how old these are – the box is plain white with an image on the front, but they were $3.00 in unused condition, and who could resist them? – all places that Jane Austen may have visited on her many trips to Kent [alas! my book Jane Austen in Kent by David Waldron Smithers is not in hand – I am lost!]

I have been to England many times, but have not seen the Jane Austen sites in Kent, so let’s take a short tour through these six coastered” sites, wondering if Austen visited any of them, beginning with, where IS Kent anyway?

and here a map of Kent, from Julie Wakefield’s Jane Austen Gazetteer 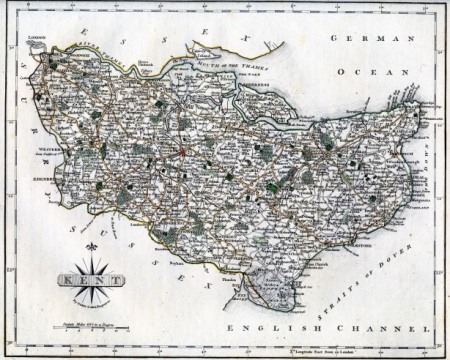 We do know that Jane Austen visited Kent many times, traveling through to her brother Edward Austen-Knight’s home at Godmersham Park, and staying in various coaching inns along the way:

and to Goodnestone Park, the home of the Bridges family and Jane Austen’s sister-in-law Elizabeth Bridges [when Austen’s brother Edward and Elizabeth first married, they lived in Rowling, a house on the Goodnestone estate. 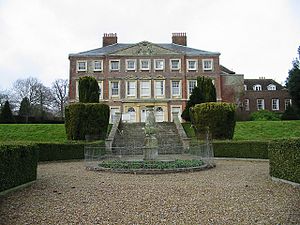 Austen may have indeed visited each of these places on my now treasured coasters. We have only her letters to tell us for sure and I depend upon the homework already done by Deirdre Le Faye in her indexes to those letters [4th ed., Oxford, 2011], and by Julie Wakefield at the aforementioned sister site to Austenonly,  A Jane Austen Gazetteer, where Kentish sites are cross-referenced to the letters.

So here are the six places on the coasters – a perfect journey through Kent, with a little bit of history thrown in, and perhaps following in Jane Austen’s footsteps!

Built during the reign of King Henry VIII, Walmer Castle is one of the most fascinating visitor attractions in the South East. Originally designed as part of a chain of coastal artillery defences it evolved into the official residence of the Lord Warden of the Cinque Ports. The Duke of Wellington held the post for 23 years and enjoyed his time spent at the castle and in recent years Her Majesty Queen Elizabeth the Queen Mother made regular visits to the castle.

The armchair in which Wellington died and an original pair of  ‘Wellington boots’ along with some of the rooms used by the Queen Mother are among the highlights. And with the magnificent gardens, a woodland walk and some excellent bird spotting there’s something for everyone to enjoy. There is also a pleasant cycle path along the beach front to nearby Deal Castle.

St Augustine, the first Archbishop of Canterbury, arrived on the coast of Kent as a missionary to England in 597 AD. He came from Rome, sent by Pope Gregory the Great. It is said that Gregory had been struck by the beauty of Anglo slaves he saw for sale in the city market and dispatched Augustine and some monks to convert them to Christianity.

Augustine was given a church at Canterbury (St Martin’s, after St Martin of Tours, still standing today) by the local King, Ethelbert whose Queen, Bertha, a French Princess,, was already a Christian. This building had been a place of worship during the Roman occupation of Britain and is the oldest church in England still in use. (from the Cathedral website) 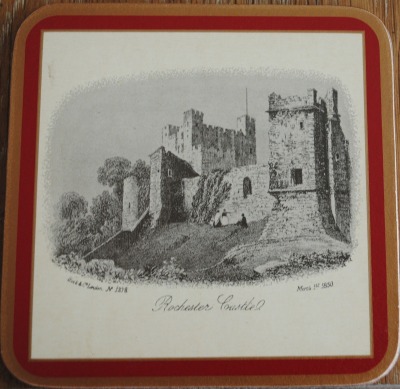 “It wanted five minutes of twelve when we left Sittingbourne, from whence we had a famous pair of horses, which took us to Rochester in an hour and a quarter; the postboy seemed determined to show my mother that Kentish drivers were not always tedious, and really drove as fast as Cax.”

Rochester Castle stands on the east bank of the River Medway in Rochester, Kent, England. The 12th-century keep or stone tower, which is the castle’s most prominent feature, is one of the best preserved in England or France. Located along the River Medway and Watling Street, Rochester was a strategically important royal castle. During the medieval period it helped protect England’s south-east coast from invasion. The first castle at Rochester was founded in the aftermath of the Norman Conquest. It was given to Bishop Odo by his half-brother, William the Conqueror. During the Rebellion of 1088 over the succession to the English throne, Odo supported Robert Curthose, the Conqueror’s eldest son, against William Rufus. It was during this conflict that the castle first saw military action; the city and castle were besieged after Odo made Rochester a headquarters for the rebellion. After the garrison capitulated, this first castle was abandoned. [wikipedia]

Commanding the shortest sea crossing between England and the continent, Dover Castle has a long and immensely eventful history. Many centuries before King Henry II began the great stone castle here in the 1160s, its spectacular site atop the famous ‘White Cliffs’ was an Iron Age hill fort, and it still houses a Roman lighthouse, one of the best-preserved in Europe. The Anglo-Saxon church beside it was once probably part of a Saxon fortified settlement: very soon after his victory at Hastings in 1066, this was converted by William the Conqueror into a Norman earthwork and timber-stockaded castle.

From then on Dover Castle was garrisoned uninterruptedly until 1958, a continuous nine-century span equalled only by the Tower of London and Windsor Castle. The stronghold hosted royal visits by Henry VIII, Elizabeth I and Charles I’s Queen Henrietta Maria: and from 1740 until 1945, its defences were successively updated in response to every European war involving Britain. [from English Heritage]

Francis Austen, a great-uncle of Jane’s, was a solicitor in Sevenoaks.  Austen sends a letter to her cousin Philadelphia Walter in Seal, an area of Sevenoaks [Ltr. 8].

Sevenoaks is a commuter town situated on the London fringe of west Kent, England, some 20 miles (31.2 km) south-east of Charing Cross, on one of the principal commuter rail lines from the capital. The town gives its name to the Sevenoaks district, of which it is the principal town, followed by Swanley and Edenbridge.

The presence of Knole House, a large mansion, led to the earlier settlement becoming a village and in the 13th century a market was established. Sevenoaks became part of the modern communications network when one of the earlier turnpikes was opened in the 18th century; the railway was relatively late in reaching it. [wikipedia]

High Street in Chiddingstone, a village in the Sevenoaks area, [and where James Stanier Clarke visits when he is writing to Jane Austen in Letters 125(A) and 132(A)], has been described as “the most perfect surviving example of a Tudor village in the county.”

A Norman knight held a Barony of Folkestone, by which time the settlement had become a fishing village. That led to its entry as a part of the Cinque Ports in the thirteenth century and with that the privilege of being a wealthy trading port. At the start of the Tudor period it had become a town in its own right. Wars with France meant that defences had to be built here and soon plans for a Folkestone Harbour began. Folkestone, like most settlements on the south coast, became involved in smuggling during the eighteenth century. At the beginning of the 1800s a harbour was developed, but it was the coming of the railways in 1843 that would have the bigger impact.

Until the 19th century Folkestone remained a small fishing community with a seafront that was continually battered by storms and encroaching shingle that made it hard to land boats. In 1807 an Act of Parliament was passed to build a pier and harbour which was built by Thomas Telford in 1809. By 1820 a harbour area of 14 acres (5.7 hectares) had been enclosed. Folkstone’s trade and population grew slightly but development was still hampered by sand and silt from the Pent Stream. The Folkestone Harbour Company invested heavily in removing the silt but with little success. In 1842 the company became bankrupt and the Government put the derelict harbour up for sale. It was bought by the South Eastern Railway Company (SER), which was then building the London to Dover railway line. George Turnbull was responsible in 1844 for building the Horn pier. Dredging the harbour, and the construction of a rail route down to it, began almost immediately, and the town soon became the SER’s principal packet station for the Continental traffic to Boulogne.

Image and text from Folkestone History.org

So thank you for joining me on my journey through Kent – I should like to write more on this, once I have my proper research tools in hand – especially about the coaching inns that Austen stayed in her travels – so stay tuned please! And if any of you have any Kentish tales to share, especially those involving Jane Austen, please do!

And with hearty thanks to Julie at Austenonly for her references and map and to Deirdre Le Faye for her invaluable indexes!

19 thoughts on “Jane Austen in Kent ~ Or, How a Set of Pimpernel Coasters Set Me on a Journey…”