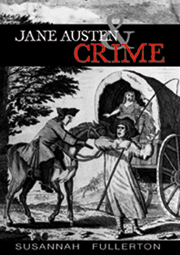 A new approach to Jane Austen seemed impossible, but Susannah Fullerton . . . has brilliantly hit on the theme of crime and punishment in Austen. Fullerton shows how the Regency world . . . was really a dangerous place with a fast rising crime rate and a legal system that handed out ferocious sentences. Her book will be essential reading for every Janeite.”-Claire Tomalin, author of Jane Austen: A Life

I admit to passing over this book when it was first available – somehow, I just didn’t want to sully my love of Austen and the “pictures of perfection” the world of her novels presents.  One knows, of course, that it is there, lurking behind the scenes, with a brief reference here, or a shady character there; and as readers of Jane Austen know, these references would have been better understood by her contemporaries than by us today, unless we are well-versed in the social history of Georgian and Regency England.

My interest peaked with my recent absorption in several detective novels set in the Regency period (the Julian Kestrel series by Kate Ross) –  these mysteries evoke the time beautifully – the lovely clothes, the balls, the always proper social behaviors – but also the underbelly of this world – the crime, the poverty, the seedy desperate lives, the world that Dickens and his characters inhabited. Indeed there are many non-fiction books on this subject, just on London alone [see below for further reading], but I turned to Fullerton’s book to get not only a quick overview of the crime of the time, but to see it in the context of Jane Austen’s life and works.  As Fullerton begins:

Why Jane Austen and Crime?  Why the juxtaposition of these seemingly disparate concepts? Simply put, because the relationship is there. Crimes against human life, crimes against property, crimes of passion, social crimes, grim punishments, and even fictional (Gothic) crime were very much a part of the Georgian world.  Ever the perceptive observer of her society, Jane Austen does indeed include comments on crime and the effects of crime in her letters, in her juvenilia and, treated very differently, in her mature novels.  An examination of crime in Jane Austen’s world and fiction suggests many new perceptions of her work and gives a greater understanding of her genius. [p.3]

And Fullerton ends with:

Jane Austen was not a reformer.  She suggests no solution to these problems.  Rather she was a highly perceptive observer of her society who commented incisively on the behaviour of men and women.  She included criminal behavior in her works and she included punishment even, if unlike Dickens, she never made crime the climax of her story or chose a prison as the setting for a novel.  She was aware of the confused laws which governed the Georgian age, she knew of the debates concerning the softening or abolishing of these laws, she wove her knowledge into the fabric of her writing.  Crime became a part of her plots, crime revealed character, crime emphasized duty and responsibility, and crime even united some of the heroines and heroes.  She examined the inclination to do evil, analysed the faulty propensity which drives a man to wrong-doing, depicted the damage cause by doing wrong and described criminal feelings in her characters.  In doing so she reflected and commented on the Georgian criminal scene with accuracy and sharp intelligence.  [p. 217]

And in between, Fullerton neatly presents the subject in fine organized fashion:

Within each section, the subject is analyzed in its historical context with many factual references to the laws and the notable crimes of the time, then in the context of Austen’s life; for example, her Aunt Leigh Perrot on trial for theft; her brother Edward Knight a magistrate at Godmerhsam.  Fullerton then takes us through the novels and letters to show by example how any specific crime drives the plot or shapes a character – we see John Dashwood clearly painted as the thief he is; Willoughby as a serial seducer; the gravity of Wickham’s intended “elopement” with Georgiana and the actual with Lydia; even Mrs. Norris’s petty thefts, rather glossed over in Mansfield Park, but there for the close reader to see;  we learn that Harriet Smith’s talking to the gypsies in Emma was actually a crime punishable by death by hanging!; how the theft of the chickens in Emma, actually brings about the marriage of Emma and Knightley; the smuggling of tea and other luxuries, a crime more serious than murder [London tea smugglers operated in gangs of up to 50!, and most of London enjoyed this favored beverage in its smuggled form [p. 142], certainly Jane loved her tea as did many of her characters]; the very brief reference to Brandon’s duelling with Willoughby in Sense & Sensibility, so deftly written by Austen that we barely know of it:  “We met by appointment, he to defend, I to punish his conduct.”  [Fullerton points out that with this one sentence, Brandon becomes the only one of Austen’s heroes to engage in criminal activity. [p.124]].  We see Emma’s slight of Miss Bates as more than just an uncomfortable rudeness, but really a crime of bad manners, a wickedness [p.217] on Emma’s part that tells us more about her than almost anything else in the book – it is the turning point in the story when Emma finally sees herself.  And what of John Thorpe?- his lies and holding Catherine in his carriage against her will; the issues of adultery and imprisonment in Mansfield Park; the gaming laws that allowed only the wealthy to own sporting dogs, as John Middleton and Mr. Darcy.  The list goes on with these references, some obvious, some mere mention, Fullerton pulling it all together, and by giving us a better understanding of the contemporary social and moral expectations, we better understand what Austen was speaking of…

I most appreciated Fullerton’s many references to the juvenilia – it is in these works that Austen shows us the realities of her greater society, all indeed presented in an exaggerated manner with her youthful humor, but we do see how she understood this underside of life in both London and her country villages, a knowledge also apparent in the quick, short references in her letters.  For instance, in this short passage from Letter 95 [Le Faye, p. 248], Austen writes her sister from Godmersham Park:

Edward and I had a delightful morn for our drive there…. He went to inspect the Gaol, as a visiting Magistrate, & took me with him. – I was gratified – & went through all the feelings which People must go through I think in visiting such a Building.”

Austen then goes on to talk of shopping and a party, etc., but what did she actually SEE on that visit, and how frustrating she tells no more!  Here Fullerton gives us what Jane doesn’t – she explains exactly what the Canterbury Gaol would have been like, exactly what Austen would have experienced. Austen’s reference to being “gratified” takes us back to the juvenilia where crimes are everywhere, punishment handily doled out, all in high humor.

I highly recommend this book –  with all the factual references linked so well to Austen’s world, the many contemporary illustrations, helpful notes and bibliography aside – it is actually a fabulous and entertaining read!  This is not a long book or a great scholarly analysis of Austen and how crime figures in her works, but the interweaving of the laws of the day, real crimes and punishments, with the innumerable references to the fiction and letters, some so easy to miss on a casual reading, all this gives us a heightened awareness of how while Austen seems to present a nearly perfect social order on a very tiny scale, that not far behind the scene are some very serious worldly concerns, frighteningly real and not so pretty.

The book is available from Jones Books.  However, the JASNA-Vermont Chapter has several copies for sale, so, if you would like to support our local group, please contact us directly.

Fullterton provides a bibliography on the many aspects of crime of the period.  I list here only a few: